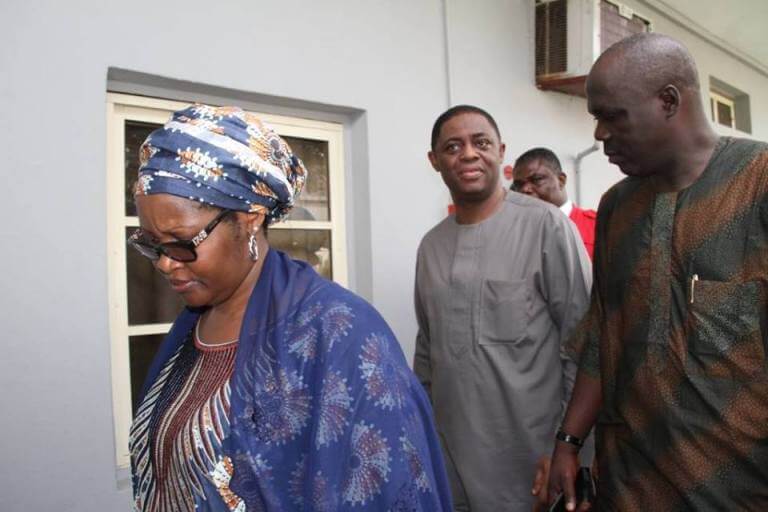 The Economic and Financial Crimes Commission, EFCC, had arraigned the two
on a 17-count charge of laundering about N4.6 billion.

However, they pleaded not guilty.

They were charged along with former National Chairman of Association of Local Government of Nigeria, ALGON, Yusuf Danjuma, and a company, Jointrust Dimentions Nigeria Ltd.

Ms. Usman is urging the court to allow her to be tried separately from Mr. Fani-Kayode, and for her trial to be transferred from Lagos to the Abuja division, for convenience.

Arguing the application on Wednesday, her lawyer, Abiodun Owonikoko, said: “the issue of venue of criminal trial is governed by the nature of the offence and the place it was committed.”

Mr. Owonikowo cited Supreme Court’s dismissal of the case of Rhoda vs FRN because the offence was committed in Kano but the suspect was tried in Abuja.

He said that his client’s application was based on her health condition.

He added that “Nenadi lives in Abuja and therefore has to travel to Lagos each time the case comes up, and has to spend at least three days in Lagos on each occasion.

“On the issue of convenience of forum, the end of justice will be served if this case is taken to where the offence was allegedly committed.

“The fact that arraignment has taken place does not mean the case cannot be transferred.”

Opposing the application, EFCC’s lawyer, Rotimi Oyedepo, said the chief judge could not
exercise his powers to transfer a case where the prosecution had called its first witness.

Besides, he said, 13 of the listed 17 witnesses live in Lagos, adding that the instance cited by Owonikowo was not applicable.

He said “severing the charge will mean duplicating evidence before different courts. I urge your lordship to refuse this application.”

Mr. Fani-Kayode’s lawyer, Norrison Quakers, also moved the former minister’s application, asking the judge to disqualify himself from adjudicating on the case.

He contended that Justice Muslim Hassan, who worked as Head of Legal Services at the EFCC before his appointment as a judge, signed the money laundering charge for which Mr. Fani-Kayode was previously tried.

He added that Mr. Fani-Kayode was however, acquitted by Justice Rita Ofili-Ajumogobia on July 1, 2015.

In response, Mr. Oyedepo also opposed the application, saying although Justice Hassan signed the charges as head of EFCC’s legal department, the case was prepared and prosecuted by an external counsel, Festus Keyamo.

He said “at no time did the judge feature in the trial.

“We (EFCC) were also extremely scolded by your lordship when the applicant was re-arrested in court in relation to another matter.

“Nothing has been placed before my lord to justify the likelihood of bias. This application is only intended to whip up sentiments and paint the court in bad light.

“It is not for any party to decide the judge that will adjudicate on a case. I urge the court to dismiss the application.”

After listening to counsel, Justice Hassan adjourned ruling in the case until March 16.

Gmail increases attachment limit to 50MB — but only for recipients