AMCON Puts D-ROVANS Hotel In IBADAN Up For Sale 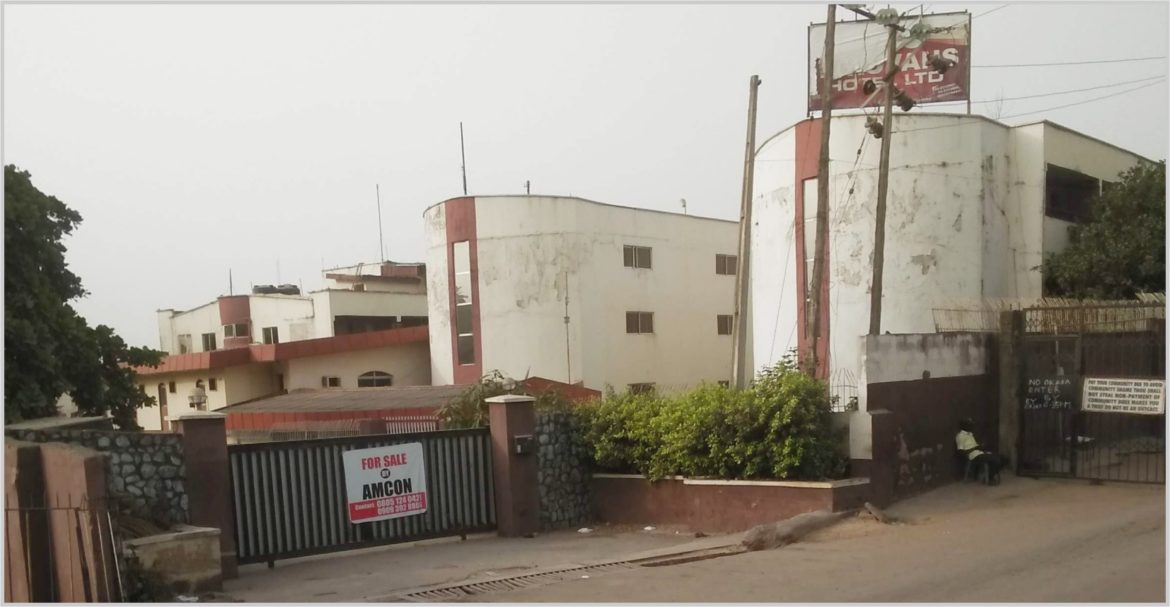 The Asset Management Corporation of Nigeria (AMCON) has finally put up the popular D-Rovans Hotel in Ibadan for sale. This is coming three years after the passing of the late great hotelier and businessman, Chief Francis Aiyegbeni. The hotel, it was exclusively gathered, is being put up for sale as a result of some unserviced bank loans acquired by late Aiyegbeni years back. The loan, according to an inside source, was not serious, perhaps some couple of millions but skyrocketed into a serious debt due to negligence or whatever reasons best known to the late business tycoon.

Though it couldn’t be ascertained as the time of filing this report, but some enquiries made by this reporter revealed that AMCON is placing a whopping sum of 800 million naira on the property for interested buyers.

It would be recalled that this magazine broke the news when the initial take over of the property by AMCON came up sometime in 2017. We did an extensive story on what went down back then. We also did a follow up story titled “Popular Ibadan Hotel D-Rovans, Sold” sometime in March, 2019, regarding the potential buyer named in the deal then. An Eruwa-born businessman cum politician whose name we’ll not want to mention here was said to be interested in taking over the property. We, indeed, also reported that arrangement was in a top gear for the new management to take over the property. In the said reports, it was reported that the children of the late hotelier have decided to sell the property in order to offset the debt, and also to sort some other family issues.

Our reports then however, sparked up strong reactions from all the parties involved back then. The family and the supposed new management reacted to the story, claiming some parts of the reports were not true. They were later to give us what they said was the true position of things.

According to the Edge Executive Limited, who was said to be the management company to oversee the whole deal and one of late Aiyegbeni’s daughter, Ms Edna Bola Aiyegbeni. The agreement then was not a total take over but some part, while the other parts were to be leased for a period of 20 years. The two parties however denied involvement of any Eruwa-born businessman in the deal.

Edna Aiyegbeni made us to understand that what they had then was still negotiations and that money has not exchanged hands. She was also furious that we put it in the story that the family decided to sell the property, to sort some family issues. “There was never and there is no family issues to be sorted,” she said.

When asked about what really transpired between the family and AMCON. Ms. Edna Bola Aiyegbeni has this to say, “I would say, because you asked about the amount that was taken, what happened with AMCON and the family is a very ridiculous thing and it is due to the family’s carelessness or maybe my dad not handing over properly to the management. Because the amount that was actually taken from the bank was about 20million naira or so. But because we didn’t pay attention to it, the thing increased and I think it increased to about one hundred and something million. But now, there was a house in GRA which was taken to offset part of the loan. So, the amount has come down significantly and because the Edge Executive is taking over the management of the hotel, they are taking over the assets and liabilities. So, by the agreement they will be in charge of AMCON and the family will have nothing to do with the issue anymore,”  She told us back then. But unfortunately and for the best reasons known to the parties involved, after all said and done, the deal didn’t see the light of the day. That must have led to a kind of breakdown in whatever agreement Aiyegbeni family must have entered into with AMCON, which is the reason the hotel is being put up for sale again.

D-Rovans Hotel in its hey days was one of the hottest hotels in Ibadan; in fact, the most popular after Premier Hotel. Chief Francis Aiyegbeni, in those days, was an institution in both the entertainment and hospitality sectors. He was a singer, a boxer and businessman of note. He was rich and famous with properties scattered all over Ibadan.

Back in the 1990s, King Wasiu Ayinde Marshal played there every last Friday of the month while on other days, the Rovans Band, sometimes led by Chief Aiyegbeni himself treated guests to good music. Virtually all the prominent high life singers, at one point or the other, played at D-Rovans. Not to talk of the Wallan Hall section of the business, which played host to major events and movie premiers back then. In the ’90s, if you have not gone to D-Rovans either to watch films or to swim or to club on Fridays, then you can never be recognised as a happening girl or guy. It was a hub of entertainment in Ibadan and top socialites from across the South-West and beyond.