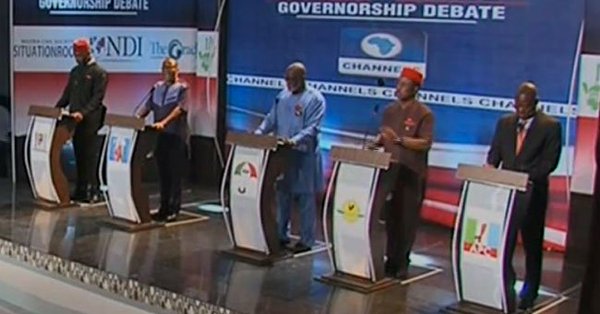 Five governorship candidates for the November 18 governorship election in the Anambra state on Sunday, clashed at the governorship debate organised and televised by Channels Television.
The candidates include incumbent governor, Willie Obiano of the All Progressive Grand Alliance (APGA), Mr Oseloka Obaze of the Peoples Democratic Party (PDP), Dr. Tony Nwoye of the All Progressives Congress (APC), Osita Chidoka of the United Peoples Party (UPP) and Progressive People’s Alliance (PPA) candidate,  Godwin Ezeemo.
According to Daily Sun, the candidates who presented their vision for the state and why they were in the race took turns to answer questions on some key issues on the state.

Obiano, who is contesting for a second term said that if re-elected he would make Anambra State first choice investment destination and hub of economic activities in the country. He also said that under his administration, indigenes and non-indigenes alike would be given equal opportunity for wealth creation. He also said that if all states in the country were like Anambra State, Nigeria would not be in recession.

Obiano on his part, seized the occasion to again deny receiving N75bn from his predecessor, Peter Obi, saying that he (Obi) left N9bn in cash and issued cheques worth over N15bn. But, Obaze challenged him, asking why he (Obiano) waited four years before denying receiving the said amount.

“Obi left N75bn in cash, foreign exchange and assets and in his handover notes these figures were well documented. Obiano received these notes and signed them, if he claims to be an auditor, why did he sign those handover notes and agreed to have received the funds? Why did he wait four years before denying? It is because he knows that those funds were given to him.”

He said his predecessor generated Internally Generated Revenue (IGR) of N40bn in eight years and received over $2bn, while he (Obiano) has been able to generate N551bn in three and half years but received only 40percent of what Obi received from the federal government. He also said that the state had begun export of yams and vegetables to the United Kingdom and has completed 51 roads of 337 kilometres and made payment of N38bn to solve erosion problems.

“Onitsha- Enugu expressway has not been done because it is a federal road and they are owing N43bn. The federal government was owing N49bn but it has been brought down, when they pay it, I will construct the road”, Obiano said.

Nwoye on his part said he has been able to lobby the federal government to begin work on the Onitsha expressway and promised to make the state an industrial hub through the provision of power and water, if elected governor.

Obaze challenged Obiano over these claims asking him to state any two kilometres of road he started and completed. “This government has spent over N600bn in the last four years on roads but there is nothing to show for it.”

Chidoka, while responding to Obiano’s assessment of other candidates said “can you compare a 60-year-old man who retired as Executive director of a middle-class bank and a man who became CEO at 35 years? We cannot collect from the poor to build a state. Anambra is not a sustainable state and my ambition is to reverse the trend.”

On his part, Ezeemo said, “this state is wallowing in trouble, that is why we need selfless people to take over leadership.”

On the issue of the agitation of the proscribed indigenous People of Biafra (IPOB), Nwoye said he would tackle the issue by providing employment opportunities for the teeming unemployed youths because he believed the agitation was caused by lack of jobs, while Obiano empathised with them, but noted that the solution was restructuring.

Obaze, however, blamed Obiano for the surge in agitation and accused him of mishandling the situation. He said that it was unfathomable that the governor would sit by and let South Eastern youths be branded terrorists by the federal government, telling him to accept responsibility.

Chidoka and Ezeemo also differed, saying that the agitation was not caused by unemployment. They believed that the root of the issues is structural problem caused by the imbalance in the country.

“Nnamdi Kanu was the London chairman of APGA, but because the party deviated from its ideology and became a money-making machine, the seeds of IPOB were sown. Those agitating all over the world are professionals and not unemployed”, Chidoka said.

Speaking on the viability of having an airport in the state, Obiano said the airport project at Umuleri is being financed by three companies to the tune of $2bn while the state government gets 10percent equity shares. He promised that the project would be completed in three years.

But Obaze and Chidoka described the project as a waste of resources. They argued that many of the surrounding states already had airports; as such they advised that such funds be channelled into infrastructural and human development.

Chidoka said, “No state government owns an airport because it’s in the exclusive list. If a state builds an airport, the federal government would eventually collect it. When I was Minister for Aviation, I collected three airports from three state governments.
“The government should rather channel the $2bn meant for the airport into transforming Awka and Onitsha into megacities.”