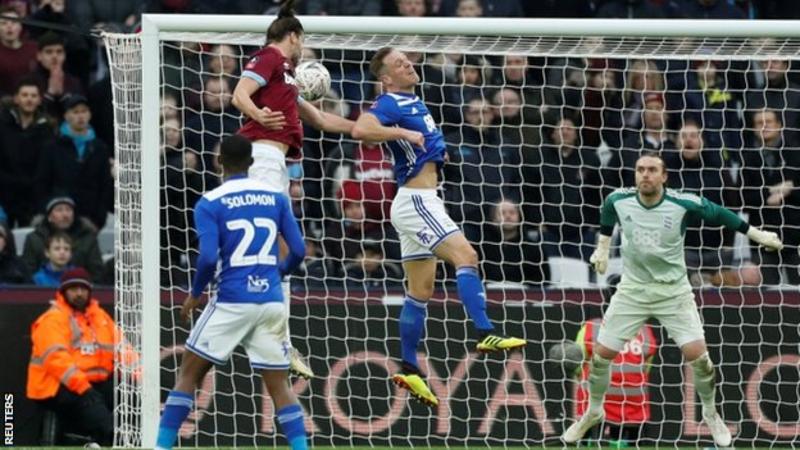 Andy Carroll scored his first goal since April as West Ham earned a place in the FA Cup fourth round with a win over Birmingham.

The Hammers striker, who made his first start in a year on Wednesday, came on as a 19th-minute substitute for injured goalscorer Marko Arnautovic.

But his injury-time header sealed the win after an open game where Birmingham wasted several chances to level.

Arnautovic headed in after two minutes before he was replaced.

The Austrian striker, who is now West Ham’s joint top scorer with nine goals, appeared to share a disagreement with boss Manuel Pellegrini when he left the field, and did not seem too distressed by the injury.

Despite a difficult game where Carroll seemed to be lacking sharpness, including a late miss before his goal, the West Ham manager will be buoyed by his return to scoring form.

There was also a positive return to action for debutant Samir Nasri, who took control early on before he was replaced by Robert Snodgrass in the 58th minute.

Birmingham, who are eighth in the Championship and four points off the play-off positions, will rue several chances to get themselves back into the game.

Blues striker Lukas Jutkiewicz was guilty of a hat-trick of misses, while full-back Wes Harding’s touch let him down when he was clean through on goal from an angle.

Both Pellegrini and Birmingham boss Garry Monk named strong line-ups which contributed to a robust and open encounter where Carroll was involved in several physical exchanges with the Birmingham defence.

The hosts’ superior squad depth counted as Snodgrass’ extra energy appeared to turn the game in West Ham’s favour in a second half where Birmingham looked like they would score.

Felipe Anderson was also introduced to give added threat and there were positive contributions from midfielders Grady Diangana and Michail Antonio.

But the last hurrah was left to Carroll, who had already shown his worth by clearing one Jutkiewicz effort off his own goalline.

How I Ended Up In Music – Niniola