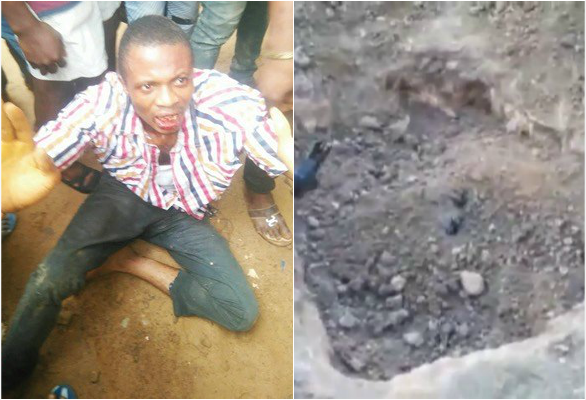 Angry youths have reportedly buried alive a suspected armed robbers, Chukwudi Omaka, who along with his gang members allegedly robbed and killed a businessman.

The businessman, Idam Ogbonnia, was killed at Amaisri community in Afikpo North Local Government Area of Ebonyi State. Police on Monday, paraded three of those who reportedly killed Ogbonnia. A witness, who is a resident of the community, Emmanuel Udu, said Omaka was also among robbers who robbed a cold room known as Etuelughu, belonging to Oko Udu Monday and another businessman identified simply as David, selling provisions.

He said: “The handsome boy (Omaka) was beaten thoroughly. Despite that, he refused to name his members. He was later buried alive by Amasiri youths.”

It was learnt that after burying Omaka, youths planted a tree on the grave in accordance with the customs of the community against anyone who committed a crime. The tradition has been as old as the community.

He said the incident occurred last Friday and that some suspects, including Gideon Omaka, were arrested.

Madu said the state commissioner of police had declared war on criminals by deploying policemen to fish out criminals in the community. Gideon (29), told journalists he was a former convict but did not know anything about the robbery for which his brother was killed.

He said: “I was in my house when people attacked me and killed my brother, Chukwudi. I ran away.

They said my brother was one of those who robbed Idam Ogbonnia in my village.