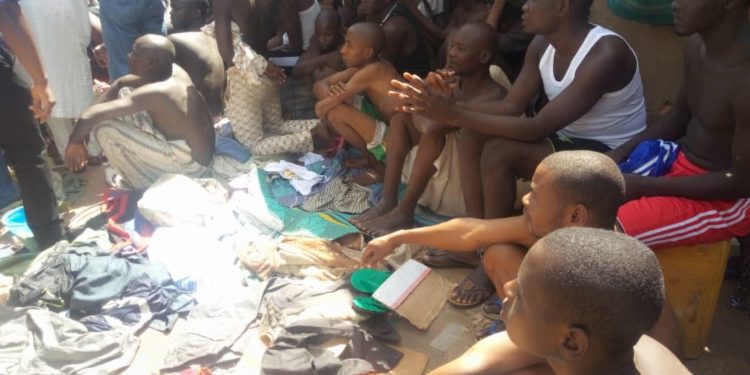 The discovery is barely two weeks after a similar discovery in Kaduna with chained inmates.

He conducted newsmen round and inside the building housing the centre on Monday afternoon in Daura.

According to him: ’’Our preliminary investigation revealed that Malam Bello, a former qur’anic teacher for close to 40 years, had been collecting Children from their parents on a veiled promise of rehabilitating them, unfortunately he does the opposite as nothing Islamic or moral teachings happens here.

‘’Unfortunately he chained the inmates both adult and children, drawn from across the various states of the country, with most others from Niger republic , Cote de Voir and several other African countries and clearly unbecoming of any rehabilitation centre.”

He informed the police command was alerted when the inmates revolted and resorted to violent protests with about 200 of them fleeing with the assistance of neighbors on the streets.

An inmate, Lawal Adamu, 33, from Niger Republic told The Nation that each of the 6 cells at the centre hosts 80 inmates, all in chains and sparingly fed.

He was stated .there was no toilet and place for bathing at the centre and nothing like praying except torture.

The Monarch, who made the call when the Commissioner of Police for Katsina state visited him to report the arrest of Malam Bello, expressed his disappointment over the development and promised to report the matter to President Muhammad Buhari to ensure justice.