Home Sports Anthony Joshua Did to Klitschko What No One Has Done to Him Before – Boxing Legend, Mike Tyson Speaks Up
Sports

Anthony Joshua Did to Klitschko What No One Has Done to Him Before – Boxing Legend, Mike Tyson Speaks Up 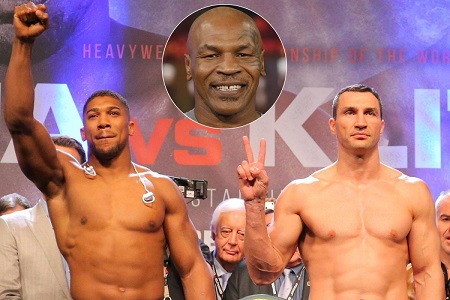 Boxing legend, Mike Tyson has spoken out about the Joshua vs Klitschko fight that shook up the world recently.

Mike Tyson has tipped Anthony Joshua to carry the torch for boxing’s heavyweight division for many years to come after his victory over Wladimir Klitschko, ESPN reports.

Joshua added the WBA and IBO heavyweight title to his IBF crown with a stunning stoppage of Klitschko on Saturday, a fight watched by 90,000 people at Wembley Stadium.

The excitement Joshua has brought to the heavyweight division has led to comparisons with Tyson in his pomp and the Brooklyn-born fighter believes the Brit is only just getting started.

“Whenever there’s a new heavyweight champion and he’s explosive like that and wins the title like that it changes the whole game,” Tyson said at the launch of his Mike Tyson Academy franchise in Dubai.

“All the little guys that were making a lot of money are not going to make their money anymore.

“It’s all going to be about Joshua and the heavyweights now. That one fight changed boxing.”

Tyson admitted he knew little about Joshua before the fight but insisted that he exhibited all the qualities necessary to be a long-serving champion.

“It was a great fight,” Tyson told ESPN. “I had actually picked Klitschko to win as I thought this was just some jumped-up young guy from England. But man he fought well. Klitschko is 41 and no-one have ever done that to him.

“Importantly, he showed heart. He took a big punch from Klitschko and went down but he got back up. He showed real intestinal fortitude. He’s consistent, persistent and he didn’t give up. There’s no quitting in him. I love that he goes out there to hurt his opponent, too. That’s what boxing is all about but most fighters just don’t have that hunger.

“Joshua is still just a baby with 19 fights, it took me 28 fights to become world champion. But who cares, he’s the champ. The sky is the limit for him now and he is going to dominate the division and make so much money if he just keeps on doing what he’s doing.”

The Klitschko victory was Joshua’s 19th straight win by knockout, the Brit’s impressive start to his professional career mirroring Tyson, who also had 19 consecutive knockouts to his name before beating James Tillis on points in his 20th fight.

Beyond the similar records, Tyson and Joshua also share a similar route into the sport with both starting boxing as a means to escape their difficult upbringings.

“I see the comparison, sure,” Tyson said. “If you are of an Afro-English background you’re likely to have a tough time; if you’re born in the wrong part of town it’s always going to be rough. You’re going to be financially challenged, scholastically challenged. It was like that for me and it’s like that now.

“Boxing gives kids – like me, like Joshua – an outlet. You can take a guy with nothing, clean them up and next thing he’s meeting the President of the United States or the Prime Minister of the UK. It’s a great leveller.”

Anthony Joshua Did to Klitschko What No One Has Done to Him Before – Boxing Legend, Mike Tyson Speaks Up was last modified: May 5th, 2017 by Arinze Ago