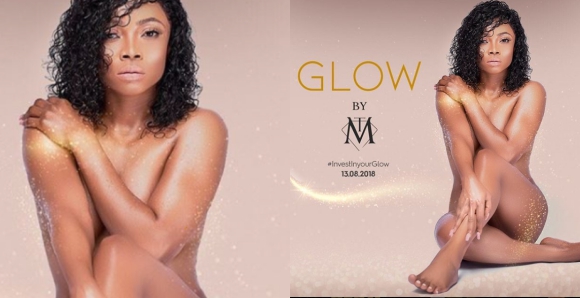 Nigerian on-air personality, Toke Makinwa has posed nude in a campaign for her new beauty brand called ‘Glow by TM’.

While the exact product is currently unknown, her decision to bare it all suggests that it is some sort of skin care product.

But for now, it is the image she shared on her Instagram page that has caused commotion on Instagram.

In the picture, Makinwa sits fully nude with arms and legs crossed to cover her private parts.

When you glow there is nothing to hide #InvestinyourGlow 13.08.2018 cc @glowbytm

“When you glow there is nothing to hide,” the ‘On Becoming’ author said in the caption for the post.
The bold move by Makinwa has caused a stir on social media; some praising her beauty and courage while others condemned her nudity.

One commenter criticised her move, saying, “there is nothing to hide anymore. Unleash the other parts while another said “remove your hand from your chest since there’s nothing to hide”.

But it was not all condemnation, as another commenter said: “Women should be allowed to express themselves whichever way the chose to, this is not been naked in my opinion.”

In the same vein, another said: “I don’t see anything wrong with this. Yes, she is a Christian, a grown up woman, and yes we young ladies look up to her. She is promoting her brand. And who are y’all that are judging.”

Makinwa was criticised by some for “going against African norms” while some fans said her move was anti-Christian.

Reacting to the condemnation, the television personality said: “You will find that people will always have opinions about your decisions.

“Don’t take it personally, it’s simply because they are not courageous enough to take action in their own lives.”

According to Makinwa, ‘Glow by TM’ will be launching on August 8.

In April, the television host shared her six-year battle with fibroids.