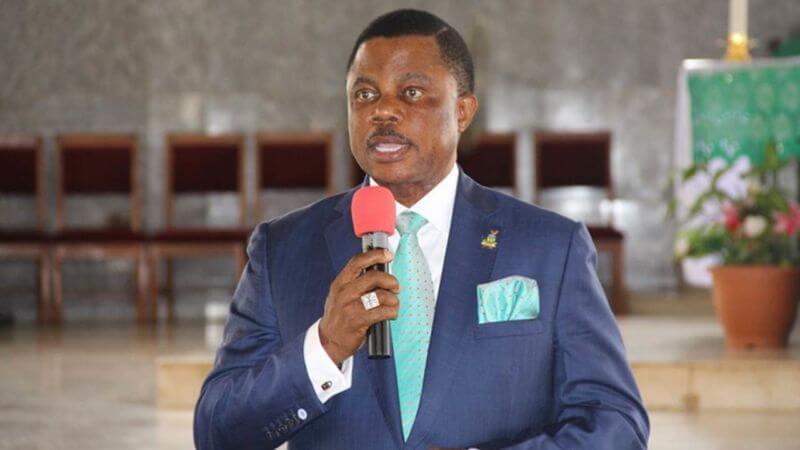 Ahead of the November 18 governorship election in his state, the Anambra State Governor, Willie Obiano, has accused the ruling All Progressives Congress,  APC, of trying to plunge the state into crisis in order to use its federal might to impose a state of emergency.
The governor who was reacting to reports credited to the APC National Chairman, Chief John Odigie-Oyegun, where he called on the former to “write his hand over notes and start preparing to vacate office,” said such statement lacked democratic spirit.
Similarly, Governor Nyesom Wike of Rivers State has called on African lawyers to help revive democracy in Nigeria, saying the ruling APC has used the police to destroy its foundation. The governor also accused the police saying, “The police is the one promoting crime in Nigeria. Most of the kidnapping in the country are done by the police. We cannot continue like this, enough is enough.”
But the police promptly responded by describing governor Wike’s statement as deceitful. Meanwhile, Governor Obiano, who reacted to calls on him by the APC national chairman to write his hand-over note, said  “No doubt this statement, which we consider as coming from not just Chief Oyegun but from the ruling APC is a clear threat to Nigeria’s democracy and security in Anambra State.
“We have it on good authority that they have been working on various options including an attempt to foment insecurity in the state to pave way for a state of emergency as a prelude to their take-over. What this requires is that Anambra people and Nigerians in general, especially lovers of democracy and good governance should be alert.
“It has again re-affirmed the undemocratic nature of many APC apostles and this is unfortunate for our nation, especially at this critical point in our history when democratic tenets should be nurtured,” he said.
In a statement in Abuja by his Senior Special Assistant on Media and Strategic Communications, Prince Oliver Okpala, the governor accused the APC national chairman of lacking integrity and moral ground to speak on good governance, saying he does not have such record.
“Oyegun’s declaration that his rudderless party will take over Anambra is also an unfortunate exposure of that undemocratic spirit and cancer that has befallen the APC. If what we practice is true democracy, where democracy is the government of the people, for the people and by the people, Oyegun could not have made such an unguarded utterance.
“If unchecked, APC’s negative political appetite will mean that the upcoming elections and the inherent display of the power of choice by the electorate will all be an exercise in futility. For them, since they control the Federal Government which is in charge of the crucial agencies such as INEC, the Police, and other security agencies,  then their sinister motive would be easily achieved.
“The naked truth is that if anything untoward happens in Anambra, the world should hold Oyegun responsible. Power is given by God and must not be sought for by killing and devilish orchestration. A destructive means cannot bring about a constructive end.
“Democracy is about the people, and its powers and legitimacy should flow from the ballot box, not the barrel of the gun, even as seemingly unattractive as that is. So, Oyegun and the APC must accept that reality, and refrain from their evil plot to forcefully remove Obiano from office come  November 18 governorship election in Anambra State.
“His declaration that ‘APC must take over Anambra’ is a signal that they are bent on forcefully overturning the will of the people who are the true custodians of democracy.
Sadly, this is not the first time APC chieftains are making such calamitous declarations. Governor Rochas Okorocha of Imo State had earlier said so when he inaugurated an illegal, thuggery gang which he said he will use to override the will of the electorate in Anambra as if Anambra was a battlefield.
“Granted, as Oyegun said, Anambra is crucial to their plot of making inroads into the South East, but must that be achieved through undemocratic means which often leads to bloodletting and mayhem?”
The statement also recalled how the Minister of Labour and Employment, Dr. Chris Ngige had made similar remarks, saying “the implication of this is that the APC has contrived a grave plot to undermine the will of the Anambra electorate, to forcefully take over the governance of Anambra State.
“Instead of working genuinely to win the love of the people of Anambra as required in a democratic setting, the APC leaders who know that  Obiano has performed creditably are rather working out sinister plots to unseat him.” He, however, called on all Nigerians, especially the Anambrans to be vigilant and prepare against “any evil plot by the Oyegun-led APC to perpetrate rigging in the forthcoming election.”
On his part, Governor Wike, who accused the police of being responsible for most kidnapping in the country, also alleged that the APC was already laying the structures to rig the 2019 general election through the promotion of indicted police officers.
He made the allegations at a state banquet he gave members of the African Bar Association at Government House, Port Harcourt on Monday night.
APC Fingered in the Anambra Security Challenges was last modified: August 10th, 2017 by Arinze Ago

INEC To Close Voter’s Registration in Anambra on August 15