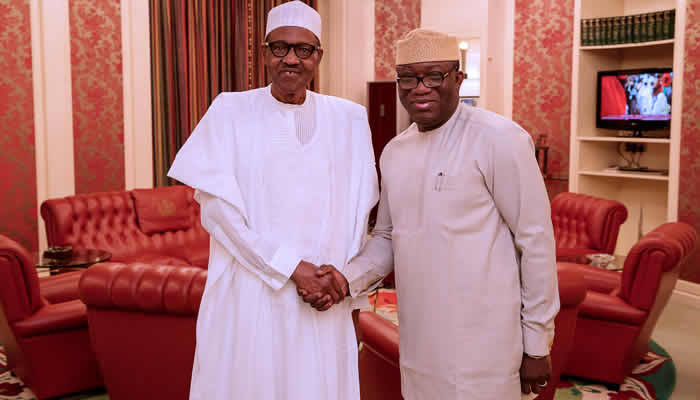 Governor Kayode Fayemi of Ekiti State, has expressed fear of the All Progressives Congress (APC) collapsing at the end of President Buhari’s tenure.

The Ekiti State Governor who was instrumental to the emergence of Oshiomhole as the Chairman of the APC alongside other Governors, said this in reaction to the move to remove the former Edo State Governor as the party’s chairman.

In an interview with Daily Trust, Fayemi stated that if processes and procedures are not institutionalized, the APC won’t be in existence when Buhari leaves office.

“The governors were instrumental to the emergence of Adams Oshiomhole as the chairman of the party. He was their colleague, so they worked together. I don’t think there’s a view about the leadership of the party in the PGF. I think there’s a clear view that the party can do a lot more than it has done.

“If we are not careful; if we do not institutionalise processes and procedures in the party and make it more inclusive than it is, we will not have a party when President Muhammadu Buhari leaves government. This is because he is the unifying force of our party.

“The governors want the party structures to function effectively and more regularly. Adams will also say that some of us have been at the forefront of pushing for even policy convention on an annual basis.

“Adams is a veteran, passionate and an ideological politician. I have worked with him closely. So I don’t see a divergence in these views. But governors also want to be respected as leaders of the party. They don’t want their views to be given a short shrift.”

Fayemi who also evaluated the performance of political leaders in the country, averred that they have neither failed or given Nigerians what they would have “loved to see in this democratization process.”

“And I underline that word ‘process’ because democracy is not an event, it is a process. And when you have a process you want the journey to be linear and progressive. But in any journey, there are bumps, values and undulating lines.”

Lagos East by-elections – a vote of...