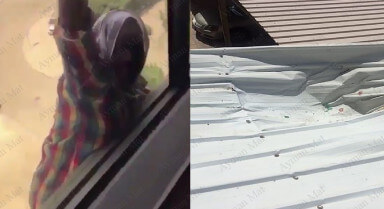 The floor looks clean in this high-rise apartment, seven stories above Kuwait City traffic. Not a smudge in sight on the picture window. On the other side of the glass, the maid is hanging on by one knuckle, screaming.

“Oh crazy, come here,” a woman says casually in Arabic, holding a camera up to the maid.

Instead, the woman steps back. The maid’s grip finally slips, and she lands in a cloud of dust, many stories below.

The maid — an Ethiopian who had been working in the country for several years, according to the Kuwait Times — survived the fall. The videographer, her employer, was arrested last week on a charge of failing to help the worker.

It’s still unclear what led to the fall. But it was not the first time a domestic servant had fallen off of a building in Kuwait, an oil-rich country where foreign workers are cheap, plentiful and live largely at the mercy of their employers.

Human Rights Watch has spent years documenting cases of workers abused, exploited, attacked or driven to desperation by a draconian labor system called kafala, in which foreigners surrender rights to get a work visa in the Persian Gulf.

Like thousands of others, its investigators are disturbed by the Kuwait City video.

“I’ve talked to workers who said they had to figure out a way to escape, and scrambled off buildings to do so,” said Rothna Begum, a researcher for the rights group. “What was shocking about this video is that the employer had filmed it from inside the flat — while she [the worker] is asking for help.”

Arabian woman livestreamed her maid as she falls from 7 storey building [UPDATE] was last modified: April 5th, 2017 by Reporter