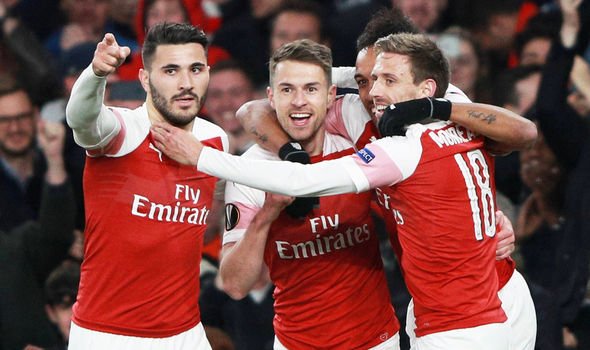 Arsenal’s Europa League quarter-final tie with Napoli is “still 50-50” according to Gunners boss Unai Emery, despite his side winning the first leg 2-0 at Emirates Stadium.

Aaron Ramsey converted Ainsley Maitland-Niles’ pass to finish off a good team move and give the hosts the lead.

Kalidou Koulibaly then scored an own goal when he deflected Lucas Torreira’s shot past goalkeeper Alex Meret.

The impressive Meret stopped the Gunners winning by more.

Napoli, who are second in Serie A, host the Gunners in the second leg next Thursday at the San Paolo Stadium (20:00 BST).

“The first leg was very important to take a good result,” said Emery. “We deserved to win, but we know it is going to be very difficult there.

“Their performances at home are usually very strong. We will plan to win the match, but we need to have a lot of respect for them. It is still 50-50. Our challenge is to be competitive away. Sometimes away we lose the spirit we have at home.”

Napoli boss Carlo Ancelotti said he is still “confident” of progressing to the last four.

“The result is difficult to change but we have 90 minutes left,” the Italian said.

The only downside of an impressive Arsenal performance is that they did not win by more than two goals to kill the tie off.

Ramsey, who is joining Napoli’s Serie A rivals Juventus on a free transfer at the end of the season, had a good game and opened the scoring.

Torreira helped double their lead when he won the ball off Fabian Ruiz and cut inside the midfielder before hammering in a 20-yard shot which deflected off Koulibaly and was later given as an own goal.

Aubameyang was back in the starting line-up after recovering from an illness which has meant he can only be a substitute in recent games.

The Gunners continued to push for a third goal after the break and Maitland-Niles’ shot on the bounce was expertly tipped over the bar by Italy Under-21 international Meret – before Ramsey smashed an effort over from 12 yards.

Arsenal boss Emery, who won the tournament three years in a row as Sevilla boss, will hope their dominance at Emirates Stadium is enough to take them into the semi-finals, where they would face Villarreal or Valencia.

Another bonus of winning the tournament would be a place in next season’s Champions League, with the Gunners currently outside the Premier League’s top four by one point.

Napoli coach Ancelotti has won the Champions League three times, twice with AC Milan and once with Real Madrid, but has never won Europe’s second competition.

He is lucky his side, the 1989 Uefa Cup winners, still have a chance after a lacklustre display in north London.

They had two efforts on target, a Koulibaly header and low 20-yard strike from substitute Adam Ounas, both saved by veteran Petr Cech.

However, unlike Arsenal, they do not need to win the Europa League to give them a Champions League safety net, as they sit comfortably second in the Italian league.

“The first half we were really bad. We weren’t brave enough to control the game as we wanted,” Ancelotti said.

“In the second half, we showed we create chances. It will be a different environment with our home crowd behind us. I’m confident.”