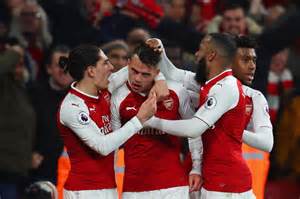 Arsenal and Liverpool played out the best game of the Premier League season so far, the Gunners coming from two goals down to lead only for Roberto Firmino to claim a dramatic 3-3 draw.

Philippe Coutinho had Liverpool deservedly in front at half-time, the Brazil international beating Petr Cech with a deft header after Mohamed Salah’s cross looped up off Laurent Koscielny.

But while Jurgen Klopp’s side dominated the first period, they were later left to rue missed chances.

An epic second half initially saw a rampant Liverpool double their advantage shortly after the restart, Salah’s shot deflecting in after Firmino led a superb counter-attack.

Their two-goal lead was short-lived, though, as a resurgent Arsenal were in front with three goals inside five remarkable minutes.

Alexis Sanchez headed through the legs of Simon Mignolet from Hector Bellerin’s pinpoint right-wing cross, and then the goalkeeper was beaten too easily by Granit Xhaka’s viciously swerving drive.

The comeback was seemingly complete thanks to Mesut Ozil’s sensational finish, the playmaker chipping Mignolet after a sublime one-two with Alexandre Lacazette, but Firmino beat Cech with 19 minutes left to level the match.

A draw was certainly the fairest outcome in a thrilling contest, with Firmino’s intervention ensuring Arsene Wenger is yet to beat Klopp’s Liverpool in five attempts.