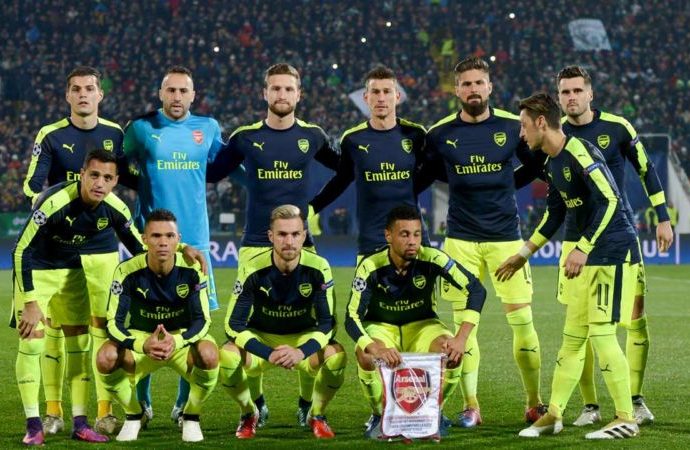 Arsenal will look to shrug off recurring doubts about their mental fortitude and the weight of recent history when they visit runaway Premier League leaders Chelsea on Saturday.

Chelsea dropped points for only the second time in 17 matches in Tuesday’s 1-1 draw at Liverpool, but Arsenal could not take advantage as they crashed to a 2-1 home defeat by Watford.

It means the gap between the teams remains nine points and should Arsenal fall to defeat again at Stamford Bridge, it is likely to spell yet another premature end to a title challenge.

“When you play at the top of the league like that, that is the most disappointing,” Arsenal manager Arsene Wenger said in the aftermath of the loss to Watford.

“It’s really worrying the way we turned up in the first half. Of course we want to respond against Chelsea.

The defeat by Watford, who scored twice in the opening 13 minutes, was Arsenal’s fourth of the campaign and curbed a resurgence that had seen them take 13 points from a possible 15.

Arsenal’s season is slipping into familiar territory and if they are to avoid yet another campaign boiling down to the race for Champions League qualification, beating Chelsea would be a good place to start.

They have already beaten Antonio Conte’s men once this season, but it was to prove the catalyst for a surge to the top of the table for the vanquished, rather than the victorious.

It was in the 55th minute of Chelsea’s 3-0 defeat at the Emirates Stadium on September 24 that Conte switched to the 3-4-3 system that revitalised his side’s season.

The win left Arsenal third, five places above their London rivals, and came amid a run of six straight wins that would culminate in Wenger’s men drawing level on points with leaders Manchester City.

Four months on, however, Arsenal find themselves back in third, with Chelsea threatening to disappear over the horizon as they go in search of an 11th consecutive win in front of their own fans.

Arsenal’s supporters, many of whom took to social media to vent their frustrations after the loss to Watford, will not travel to the Bridge with quite the same spring in their step.

They have not seen their team win there since 2011, Arsenal having lost on each of their last four visits, including a humiliating 6-0 loss on the occasion of Wenger’s 1,000th game in March 2014.

Wenger will be absent from the dug-out on Saturday as he serves the third match of a four-game touchline ban for manhandling fourth official Anthony Taylor during the 2-1 win over Burnley.

Further complicating matters for the Frenchman is a raft of missing midfielders, Aaron Ramsey having joined the list of absentees after sustaining a calf strain against Watford.

Granit Xhaka is banned, Santi Cazorla remains injured, Mohamed Elneny is preparing for the Africa Cup of Nations final with Egypt in Gabon and Jack Wilshere is still on loan at Bournemouth.

Alex Oxlade-Chamberlain, who replaced Ramsey against Watford, is likely to partner Francis Coquelin in the holding roles.

Chelsea are a man lighter after Branislav Ivanovic departed for Zenit Saint Petersburg on Wednesday, but Conte again has a fully fit squad to choose from.

His only dilemma concerns whether to persevere with Willian on the right of his attacking trio or recall Pedro, who started on the bench at Liverpool.

Conte has urged his side to focus only on their own performances and centre-back Gary Cahill knows victory on Saturday would represent a big step towards the title.

“We keep going because we want to win the league,” he said.

“It’s as simple as that. This is a very big week for us.”

Arsenal’s title hopes on line in Chelsea clash was last modified: February 3rd, 2017 by Arinze Ago