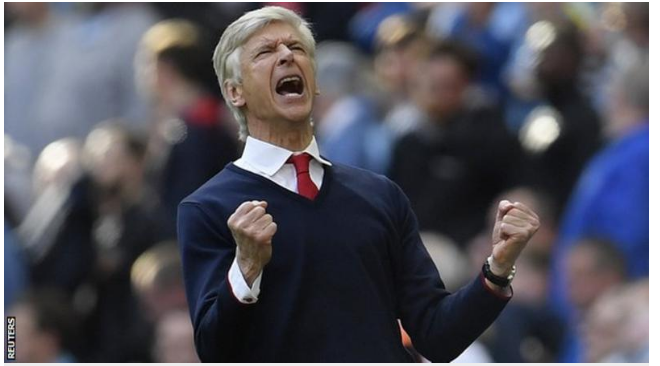 Arsene Wenger said his farewell to Emirates Stadium with a thrashing of Burnley to leave in the same way it all began for him as Arsenal manager 7,876 days ago – with victory.

In a season of discontent and occasional open rebellion, this was a day for a united front to celebrate the career of the manager who has brought so much success and style to Arsenal since starting his reign with that 2-0 win at Ewood Park in 1996.

And in a campaign of disappointment that will now be viewed as the end of an era, the last hope of success snuffed out by the Europa League semi-final loss to Atletico Madrid, Wenger at least got the home send-off he so deserved – with a stylish win over Burnley.

The Clarets, who have a wonderful story of their own this season, were outclassed as Arsenal ran out 5-0 winners to give Wenger his 475th win in 826 Premier League games.

This was not the time to celebrate a single victory but to reflect on all the triumphs and pleasure Wenger has brought to Arsenal in almost 22 years, and everyone played their parts perfectly on and off the pitch. The differences of this season were set aside as the good and the great of Wenger’s reign came into sharp focus.

The Emirates was draped in tributes to Wenger, with giant “Merci Arsene” banners outside the ground, while red T-shirts bearing the same slogan and the date were placed on each one of the 60,000 seats in the stadium.

Wenger, who is clearly departing with reluctance with 12 months still to run on his contract, made his entrance through a guard of honour formed by Arsenal and Burnley players, along with their manager Sean Dyche.

As he made his way towards the centre circle, huge applause reverberated around the arena that can stand as a monument to his footballing wisdom and financial expertise in the transfer market.