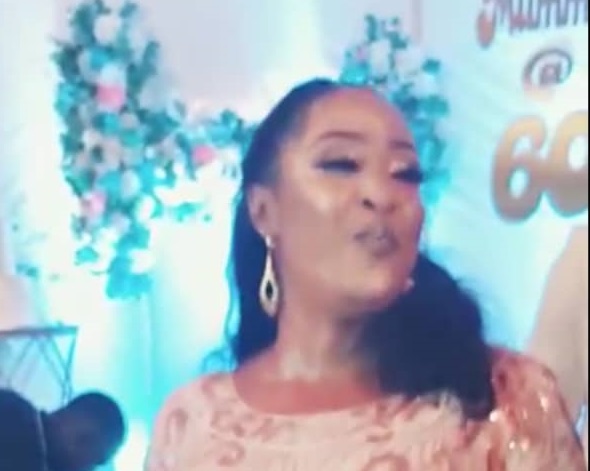 It was a low key 60th birthday that has side attractions of A-class 60th birthday as Sola Oshonaike, the pretty mother of Seyi Tinubu, son of APC chieftain, Asiwaju Bola Ahmed Tinubu throws classy 60th birthday.

Saturday, November 16, 2019, as those who matter to the celebrant and his Son in attendance

Seyi Tinubu, fondly called Oju Eko, was up and doing to make sure that his Mum had the best birthday in town.

He also disclosed that it took his pretty wife, Layla and his cousin Olumide, a week to put the event together.

The pretty celebrant who looks many times younger than her age took many by surprise when she stepped out in a blush pink beaded gown that fit her curvy body.

She danced with his only son, Seyi, who was supported by his wife, and 3 of Seyi’s Nieces and some other cousins who flew in for the birthday

The party, which many thought would have been a gathering of Politicians wasn’t, and this was disclosed that Seyi wants his Mum to enjoy her birthday with her close friends who always support her when he (Seyi) is far away.

The celebrant, Sola Osonaike, who is described as a warm and strict person was all smiles as she walked like a Queen that she is with his beautiful aged mother and 3 sisters.

It may be difficult for one to know that Seyi is an only child seeing how much his nieces and nephews support him throughout.

Three Students Beat Colleague To Near-Death At FUTA (READ WHY)