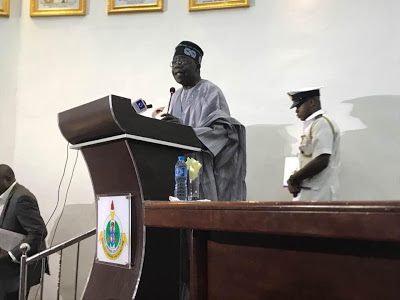 APC National Leader, Bola Tinubu, has said that since he assumed office in May 2015, President Buhari, has achieved what his predecessor, Goodluck Jonathan, could not achieve in his six years in office, Tinubu said this while delivering a lecture titled ‘Strategic Leadership: My Personal Theory and Practice,’ at the National Defense College Abuja yesterday January 25th.

He said the Buhari-led administration has been able to subdue Boko Haram.

“With the courage and dedication of the military, Boko Haram has been subdued. Also, notable and significant progress is being made against corruption. Press freedoms and civil liberties are protected, putting to lie those who cried that President Buhari would not respect democracy and rule of law.” Commending the military for defeating Boko Haram, Tinubu said “This vile force has been reduced to where it no longer poses a strategic threat. You have done so well as a military can in putting down this amorphous danger. The nation thanks you. I must say here, however, that we cannot lower our guard. We have learned cardinal lessons from the Boko Haram crisis. First, we must govern justly and for the benefit of the people to prevent the recurrence of violent extremism in the future. Widespread poverty caused by an unjust allocation of income, wealth and resources provides fertile ground for extremist ideologies, that run contrary to the inclusive democracy we seek to perfect”he said