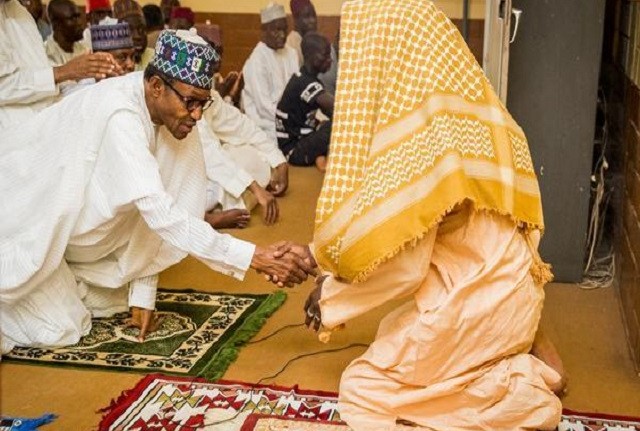 Aso mosque located in the Presidential Villa, Abuja has come fully alive again with the influx of politicians and dignitaries that now worship there.
This has not been the case in the recent times especially during the medical vacation of President Muhammadu Buhari in London.

Vanguard reports that the mosque was usually, almost empty with just a few staff of State House observing Jummat prayer there.
But with the return of the President, more government officials have started flooding the place.
Friday last week featured Governors Abdulahi Ganduje of Kano and Yahaya Bello of Kogi State amongst other presidential appointees.
The todays’ worship was not any different as many of such personalities also fellowship with President Buhari.
The roll call included the Senate President, Bukola Saraki, Governor Aminu Masari of Katsina State, the embattled Chairman of the Economic and Financial Crimes Commission, EFCC, Ibrahim Magu, the Comptroller-General of Customs, Hameed Ali and Director-General of the Department of State Service, Lawal Daura. Curiously, the Senate President who usually drives in and out directly to the Presidential forecourt walked on foot through the popular council chamber route to outside at the end of the prayers.
Some people who saw Saraki stood amazed, saying it was unusual. Efforts made to ascertain the reason yielded no results.
None of the dignitaries however agreed to speak to the State House correspondents when approved for interviews.