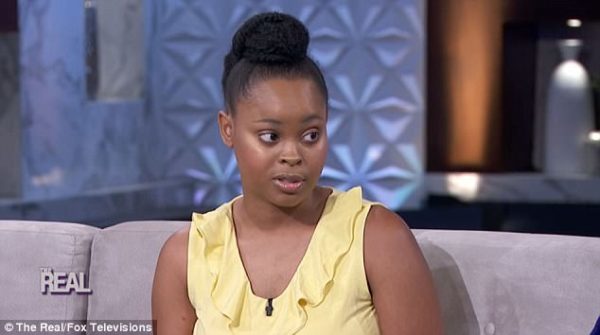 A woman who claims she had underage sex with R. Kelly after meeting him outside his 2008 child pornography trial in Chicago, says she was ‘trained’ to please him.

In a disturbing interview, Jerhonda Pace, said she was just 16-years-old when she was invited on the singer’s tour bus and found the singer naked with another woman, who Pace says was there to show her how to ‘please’ Kelly.

‘I went out there to his tour bus and you have him naked and you have her naked. And I’m looking like, ‘OK, what is this?’ Pace said in a new interview on The Real.

‘Because Rob [Kelly] is the one who took my virginity, so I was like, ‘What’s going on?’ And he said, ‘Don’t worry about it.’ I guess he saw that I was looking uneasy.’

Pace, who is now 24-years-old and a mother of three, also alleged Kelly would get physically violent with her.
In the interview with the The Real, she said the singer would ‘slap you in your face,’ ‘physically harm you,’ and ‘lock you in a room for days’ as punishment.

Pace has previously also claimed the singer was holding young women against their will at homes throughout the country in a ‘Charles Manson’ like cult.

She says wasn’t able to escape the singer until she lied to him in 2010 and told him she was going to get shoes from a nearby uncle’s home and was instructed to come right back. She says she never returned to Kelly’s house.

Pace claims the star controlled her life after embarking on a sexual relationship with him at age 16. The legal age of consent in Illinois is 17.

She is currently suing the star who has previously made cash settlements to other women claiming they were mistreated by the singer.

Watch the interview below….

At age 16, I was trained to sexually please R.kelly- Alleged sex slave was last modified: September 19th, 2017 by Reporter