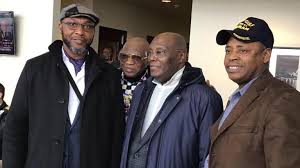 The controversy surrounding the candidate of the Peoples Democratic Party, Atiku Abubakar’s travel to the United States may not be over.

International news agency, Reuters, reported that the trip was a temporary reprieve.

The agency, in a report on Monday, said Abubakar’s visit to Washington two weeks ago to meet top US diplomats and lawmakers was due to a temporary suspension of a travel ban allegedly placed on him for alleged link to decade-old bribery scandals.

Although the US had yet to comment on the issue, some diplomats and others familiar with the visit, told Reuters that the former Vice-President had been barred from entering the US after he allegedly featured in two corruption cases.

Abubakar had on January 17 posted photos of his visit to the US on Twitter, as his supporters mocked the Federal Government, which had warned the US Government against giving him a visa.

Atiku Gets a ‘Temporary Waiver’ To Enter US – Investigations was last modified: February 5th, 2019 by Igbokwe John