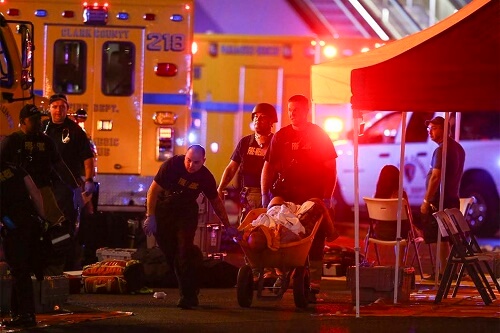 At least two people were killed and some 20 wounded when a gunman went on a shooting spree on the famous Las Vegas Strip late Sunday, police and US media reports said.

Police said that the shooter was taken “down” after officers swarmed over the famous boulevard following reports of multiple shots being fired from the Mandalay Bay casino resort towards thousands of fans at a country music concert.

“At this time we do have a suspect down,” Las Vegas police officer Steve Gomez told reporters, without elaborating.

“We have numerous victims right now,” he added.

While police did not immediately give a figure for the number of dead, CNN reported that at least two people had been killed. Several local news outlets put the number of injured at up to 24.

Pictures taken at the scene showed revelers cowering in the street or running in terror, as well what appeared to be several bodies lying prone on the ground. Video footage circulating on social media showed a large crowd enjoying a concert as part of the Route 91 country music festival just outside the casino before what sounded like volleys of automatic gunfire halted the performance.

“We heard (what) sounded like a glass breaking, so you looked around to see what’s going on and then heard a pop, pop, pop,” Monique Dekerf told CNN.

“You’d think for a moment okay we’re fine, there’s no more gunfire, then it starts again.”

A witness told local TV news station KLAS that he saw someone several stories high firing hundreds of shots into a crowd of people.

“At this time we do not believe there are any more shooters,” the department wrote on Twitter.

‘I have a checklist of all my campaign promises, and I tick them once accomplished’, Ambode reassures Lagosians