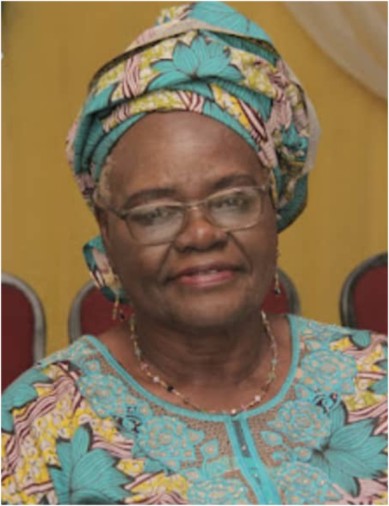 •Details Of The Burial Of Alhaja AZEEZAT ADEBISI GBOBANIYI

The event ground of LSDPC estate, Isolo, played host to a mammoth crowd weeks ago when distinguished personalities from all walks of life converged to celebrate the passing of an Icon, a woman regarded as one of the most outstanding Educationalists of her time. Every blade of grass at the LSDPC estate event ground was literally covered as family members, friends, in-laws, well-wishers and former students of late Alhaja Azeezat Adebisi Gbobaniyi, an accomplished educationist and former principal of Ansar-Ud-Deen Grammar School, Randle Avenue, Surulere, came together to give a befitting funeral to a woman adored by many and bid her final farewell.

The late Alhaja Azeezat Adebisi Gbobaniyi died after a life well spent and a hugely successful career to show for it at the ripe age of 81. She passed away on November 7, 2021 and her 8 days Fidau prayers were held on November 13, 2021. Everyone had kind words to say about her. And they were not just making up stories to paint a good picture of the deceased, late Alhaja Gbobaniyi truly impacted on the lives of many whose paths crossed hers, especially her former students, many of who, today, have become accomplished young men and proud Ambassadors of the Gbobaniyi academy.

In her time as Principal,  Ansar-Ud-Deen Grammar School achieved remarkable educational feats, winning prizes from far and near and excelling in the comity of schools within and outside Lagos state. The late Gbobaniyi was teacher, a mother and protective guardian of her wards. She was known to be a strict disciplinarian too whose standards were incredibly high. This why the 82-87 set of Ansar-Ud- Seen Grammar school will never forget their beloved principal and mother, even decades after they left the school. She will always live on inside their hearts. They remain eternally grateful to her for all she taught them while they were under her watch, noting that the many values she instilled in them, have guided them through life and stayed with them to this day. This is why, a few years back, long before she passed on, they went in search of her to celebrate her on her 79th and 80th birthdays. And when she passed on at the age of 81, the 87 set of AUD Grammar School also sent representatives on behalf of the set to join the family in the 8 days Fidau prayers held for Mama. The 87 set presented cash gifts and a memento in booklet form containing tributes from her students who have remained indebted to her for the invaluable lessons she taught them as young adults. The 87 set were ably represented at the prayers by Messrs Olamiju, Amusa and Bashir. Below is one of the tributes written in honor of Mama Gbobaniyi:

O Gbobaniyi, our hero of a principal

A shout of BOYS and all the students’ brains would reset.

They attempted to silence you

They attempted to puncture your sail but they failed.

But you were not cowed

You came back stronger

You came back more dedicated

You came back more humane

Always remembered all her children’s faces

That’s what/who you were

Your name became the school

And the school became your name

O how you combed all the known and unknown hideouts looking for your boys in the whole of Surulere.

A teacher per excellence

We never knew that English Language was your special forte

Until you taught us preparatory to our WASCE

What great dexterity you exhibited.

You reproduced yourself in us in multiple dimensions

You defined what a real teacher should be-

letting parental care intersect with the academic and moral uprightness of pupils.

Your doggedness and determination to raise future leaders paid off handsomely.

Those that were against you wanted to be like you

They were indeed jealous of your effectiveness

Your vibrancy was translated to everything that you touched- PTA; commitment of your teachers; your boys; d school team; inter-house sports etc.

We are so grateful to God for letting our path cross with yours.

Indeed you lived for humanity

You fought a good fight

You came, you served and you conquered.

You deserve your rest after leaving your enviable prints on the chequered pavements of life.

No doubts the earth’s loss but heaven’s gain.

We love you permanently.

We carry on, with pride, the torch that you handed over to us and we remain your worthy ambassadors.

You live on in our hearts.

Continue to rest in perfect peace.