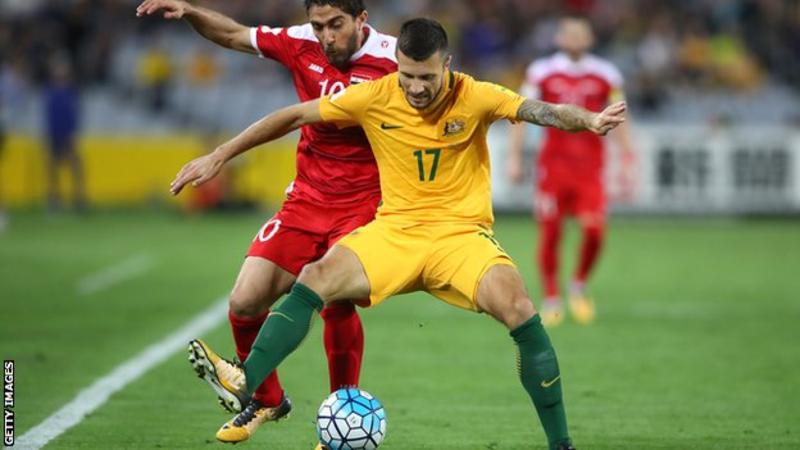 Omar Al Somah gave the civil war-torn nation hope of reaching Russia when he gave them an early lead in Sydney.

But Cahill, 37, quickly equalised with the first of his two headed goals.

Syria, who drew 1-1 in the first leg, were reduced to 10 men when Mahmoud Al Mawas was sent off before Cahill nodded in Robbie Kruse’s cross for the winner.

Australia will now play either Panama, Honduras or the USA for a place in the finals.

But Hertha Berlin winger Mathew Leckie, 26, engineered parity for the hosts when he provided the perfect cross for former Everton midfielder Cahill’s first on 13 minutes.

The Socceroos took control thereafter but Syria defended resolutely and got to extra time, but their task became harder when Al Mawas saw red for a second booking for bringing down Kruse.

Yet even a man down, the visitors almost took the tie to penalties when Al Somah’s free-kick hit the post in the 121st minute.

Socceroos and Melbourne Victory midfielder Milligan hailed the work ethic of Cahill and the rest of the team as they took a step closer to Russia 2018.

“Timmy (Cahill) worked outstandingly. That is something we have in us. We work until we cannot anymore,” said Milligan.

“I didn’t mean to give it away (before Syria’s goal). It was a loose pass. I could have hit it a bit harder but they punished us with the quality in their striker.

“The longer the game went on, we had a good stranglehold on it. They fought with everything, they were outstanding and gave us an extremely tough match on our home soil.