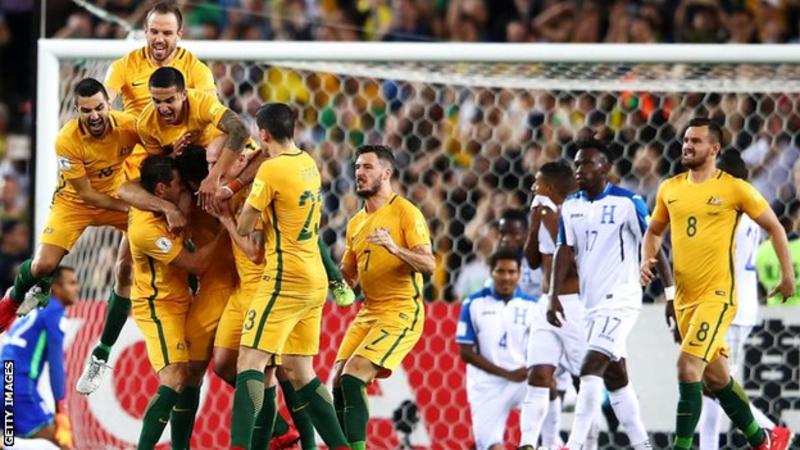 Australia have qualified for a fourth successive World Cup by beating a physical Honduras 3-1 at Stadium Australia in Sydney.

Jedinak then drilled in penalties after a handball by Bryan Acosta and foul by Johnny Palacios to seal victory.

Maynor Figueroa bundled in late on, but it was too late for the visitors.

The match was played in front of 76,080 fans at Stadium Australia, but the atmosphere was tense as the Socceroos initially struggled to break down their deep-lying opponents and Tommy Rogic screwed a shot wide from their best opening.

With the away goals rule in effect, Australia were still vulnerable after their opener, but two clear penalties gave them breathing space long before the final whistle.

There were seven yellow cards in a match that had been preceded by Honduran claims that their training sessions were spied on by a drone.

“This group has gone through a lot, from the way we want to play, to not qualifying automatically, to tough [play-off] matches against Syria, to the talk before this one,” said veteran midfielder Mark Millgan, who has been part of Australia’s last three World Cup campaigns.

“This group really deserves it.”

Australia are the 31st team to book their place at next summer’s World Cup with either New Zealand or Peru to complete the 32-strong field.