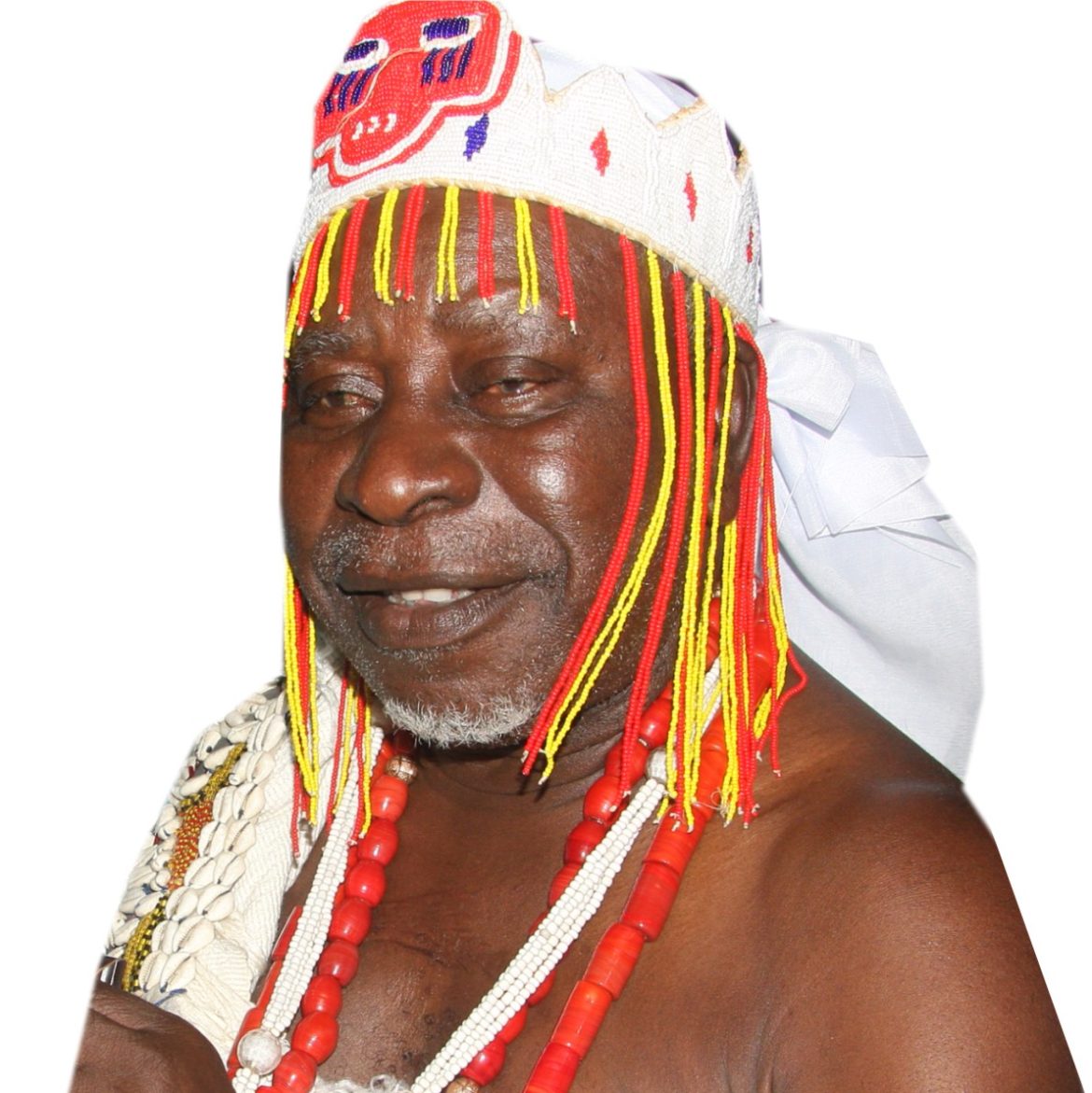 He will be 85 in a few weeks, but veteran actor, Oloye Jimoh Aliu does not look like someone in his eighties it. At the just-concluded grand hosting of TAMPAN Actors & Actresses hosted by City People Magazine in Akure, the capital of Ondo State, he was one of the Theatre practitioners who instantly became the cynosure of all eyes. He is one of the few who you can call Agba Osere (master actors), in the Yoruba movie industry, because he has been acting for over 4 decades since he was young. And now he is 84.

Popularly known as Aworo, he was born on November 11th, 1939 in Okemesi, Ekiti West local government area of Ekiti State. He is a seasoned artiste, producer, location designer, director, make-up artist and singer.

He is widely known to have attended elementary school for just 6 months and was born in mystifying circumstances. His father, Aliu Fakoya, was a Muslim and an Ifa priest who hailed from Oke-Imesi, but his mother was from Iloro-Ekiti. As an itinerant Ifa Priest and Diviner, Aliu Fakoya took his son, Jimoh’ to places like Ijebu-ode, Ifo, Ota, Odogbolu, Sagamu, Ada, Aagba, Iresi, Otan-Aiyegbaju and Lagos. Jimoh attended the old St. Peter Catholic Primary School Okemesi. He was taught the art of divination by his father, as well as the use of herbs. When Jimoh was in Lagos, he learnt the trade of bricklaying, tailoring and driving.

He is a highly respected classical Theatre Arts practitioner with a passionate interest in the life of the community and its cultural heritage, as well as a commentator on Nigeria culture abroad. Chief Jimoh Aliu forms a bridge between the old and the new Nigeria. He is an actor, scriptwriter, producer/director, singer, dancer and makeup artist, costumes and location designer.  He began his acting career in 1959, when Akin Ogungbe, a Nigerian veteran dramatist visited his hometown. He became famous for his hit TV productions, “Arelu” and “Yanpon Yanrin”, which bore famous characters like Fadeyi Oloro, Orisabunmi and Aworo.

In 1967, he joined the Nigeria Army. He was lucky that his superior officers quickly identified his talent as a dramatist. He was mobilized to tour the liberated areas, communicating soldiers in the war affected areas during the civil war. He used pidgin english as a means of communication while he was performing for the Nigeria Army in the war fronts. He performed in places like Uyo, Eket, Enugu, Onisha, Aba, Port-Harcourt, Benin and some areas of the Northern part of Nigerian. Played acted for the soldiers include. Arugbo soge, Fesoyaiye, and Ojuenimala. He performed for the 12 State governments at the Police College Hall, Kaduna during the Nigeria Army Sports week in 1975.

He retired from the Army in 1975 to carry on as an independent artist, under the name Jimoh Aliu Cultural Group. Apart from touring many parts of Ogun, Ondo, Oyo, Kwara and Bendel States, he has performed for Nigerian Television, Sokoto, Minna, Jos and Akure. He produced four series of play for ATOKA the Yoruba photo play magazine. He also produced many radio plays, including: Ma boreje, Afopina, Odu-Ifa,/gba-Oro, Orunmila, Orisa Adimula, Igbo Olodumare, Iku jare eda, Agba-arin, Laalu, and Kutupuu.

His Television play, Igbo Olodumare based on a novel written by D.O. Fagunwa and commissioned by Yemi Farounbi, as General Manager NTV Akure marked a watershed in his career. The programme was such a huge success in Ondo State and represents till today, the most creative programme by any Television Station in Ondo State. Igbo Olodumare was shown in all the Yoruba speaking states having been on NTA Ilorin, NTA Abeokuta, NTA Akure and BCOS-TV, Ibadan. His other television drama series Igba Oro produced by Yemi Farounbi Labs Deroy Centre Limited was shown on OSRC-TV Ibadan, NTA Abeokuta, NTA Ikeja, OSRC TV Akure and NTA Ilorin. Jimoh Aliu is a resourceful actor, who has featured in many Ogunde’s films as actor, make-up artist, costume-designer etc. It is around the creative artiste, versed in Yoruba Culture, that Agba-Arin is woven around. AGBA-ARIN brings together a rich collection of the best artistes and Jimoh brings the authentic creative Nigerian.

Aliu was formerly married to his colleague and Orisabunmi star, Folake Aremu before they parted ways after 20 years of marriage. He currently has two wives – Queen Bola and Folashade.

After years on the airwaves, he was honoured with a National Merit Award of Member of the Federal Republic (MFR) in December 2005. Before he left the City People event, Oloye Jimoh Aliu who was so happy at the honour done him by City People, spoke to City People Publisher, SEYE KEHINDE about his life. Below are excerpts of the interview.

Can you tell us how many years you’ve been acting?

I will be 85. Each time I look back I am always happy at what God has done for me. That is why I always pray for a long life, to serve my God. I don’t what to do anything that will tarnish the image of my God. (Alukeamo) because I know I am now moving to the end of my life. I thank God for spraying my life up to this age, because I have seen a lot of people die at the age of 40 or 50 or 60, 70, 74, 75. But I am still alive and everything that I have, both my eyes, legs and hands are still ok. I can go at any time. I am happy I have achieved in life and I feel fulfilled. That is why my own is to continue to pray to God and to respect my people, and to respect both Alfas and Woli, and Traditional people and all the Obas in Yorubaland.

When did you start your theatre career?

I started my career in the 50s, I left my town in the year 1938 or 39. I moved with my father down to Lagos. So I grew up in Lagos. I travelled far and wide both in North, East and West and all over the world.

The name Jimoh Aliu is a big name when you mention it anywhere people always nod in recognition. Everybody has heard about the name. How does it make you feel sir?

I am happy. I praise my God that my God has not misled me. He created me in a very special way. He created me in a different way. I don’t go after money or fame. I just do my thing my own way. Money is not the motivation for me in anything I do. No. No. No. If anything happens to me today, I will take it like that. I am happy because I know God created both Bitter and Sweet.

When you were young, was there a prediction or a premonition that Baba Jimoh Aliu will be a great man?

No. No. No. Mee! No. There was nothing like that. Is it me that for about 9 years I was living at bus stops and motor parks?

I was carrying goods for people on my head at bus stops and motors parks. I used to push Omolanke at Motor Parks. I sold wood. I will go into the bush to cut trees and sell firewood at the market place. That is why I thank God that somebody like me can still make it in life.

I never believed it. I was once a conductor. I did a lot of odd jobs, menial jobs. But one thing was clear, I never smoked. I never drank alcohol.  I did not do irresponsible things. I was a responsible person, yet I moved with people who indulged in this vices.

I lived in a motor park for years. I saw them smoking Igbo (Indian Hemp). I don’t take alcohol.

But when I was in Lagos, I was a good boxer. I joined the Army. I became a soldier. I worked with 3rd Marine Commando, 2nd Division and 1st Division of the Army. I worked with late Gen. Bissalla, Late Gen. Oluleye, I worked with Obasanjo. I worked with every one of them. Maybe because I was a military man before that is why I am disciplined, that is why God created me to be who I am. What life has taught me at 84 is that once you are in this world don’t chase worldly things, don’t pay attention to the things of the world. If you chase worldly things like money, wealth you will die by the wayside. I don’t pay attention to money. I don’t chase money. If it comes it is okay. If it doesn’t it is ok, am not driven by money. I am not interested in building houses and leaving houses behind for my children. If you decided to build houses and leave it behind for your children, they will sell it to eat. Give them good education, good training. If you train your children well they will build their own houses, they will do well on their own. Don’t come to this world to gather together wealth or properties, it does not last. Things of the world don’t last. Go to the Bible it is there. Go to the Bible and check, it is written only a mad man gathered wealth to bequeath to his children. If you pay all your attention to building wealth, it will all turn to a waste when you are gone. I have seen a lot ooo! I have seen a lot of rich friends die and their riches became a waste.  I have seen some who in their lifetime saw their children selling off their properties.

In my own case, I have tried my best. I have built houses and I have a name that rings a bell all over the world. That name Jimoh Aliu that you hear is a big one. It is bigger than me. It is a name that opens doors. Why my names became big I will tell you. When I went into Theatre and I didn’t have the wherewithal, I now started moving from one school to another doing stage plays and they will give me small, small money.

I went round so many primary and secondary schools. Those people who were students at that time have since grown up. They are now big men and women all over Nigeria. Some have become Judges, Big Chiefs, Traditional rulers, Kings, Queens, Businessmen, Politicians. Then I began acting for soldiers all over. I acted for 1st Division, 2nd Division, 3rd Marine. All those soldiers have become big. They are colonels, Brigadiers, Generals today.

I then started travelling to London to cut. I then became bigger.

You can see how City People gave me an award today. See how they honoured me today. Today is one of the days I will not forget in my life at the 85 years. I pray for City People.

READ ALSO: HOW I CO-ORDINATE OPC ACTIVITIES IN 28 COUNTRIES IN EUROPE – CHIEF VICTOR ADEWALE, THE AKINROGUN OF ARIGIDI-AKOKO

I Never Knew I Could Become Somebody In Life – Movie Icon, JIMOH ALIU (Aworo)’s Last Interview