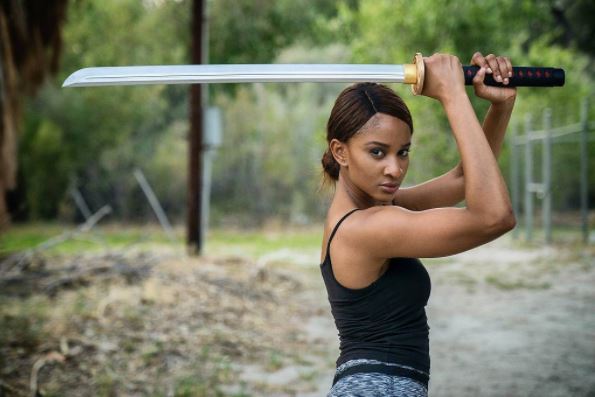 Edo State native, Adesua Etomi is set to prove to fans her versatility in acting as she undertakes an energy-tasking role in America.

Nollywood actress Adesua Etomi is certainly pushing herself in her chosen career as evident in set pictures shared on social media.
The star actress is set to feature in a new action film titled Muna, which she is filming in Los Angeles, the United States of America at the moment.
She shared photos from behind the scene striking a pose with a samurai sword looking like a badass ready for action and also a video of her practising to shoot a fight scene.
Muna is currently being directed by a movie veteran, Kevin Nwankwo under the auspices of Kevstel Production and it will feature some white people.
Adesua has become a household name in the Nigerian film industry after the success of the blockbuster movie – Wedding Party where she got married to her fiance, Bankole ‘Banky W’ Wellington.
See more photos: