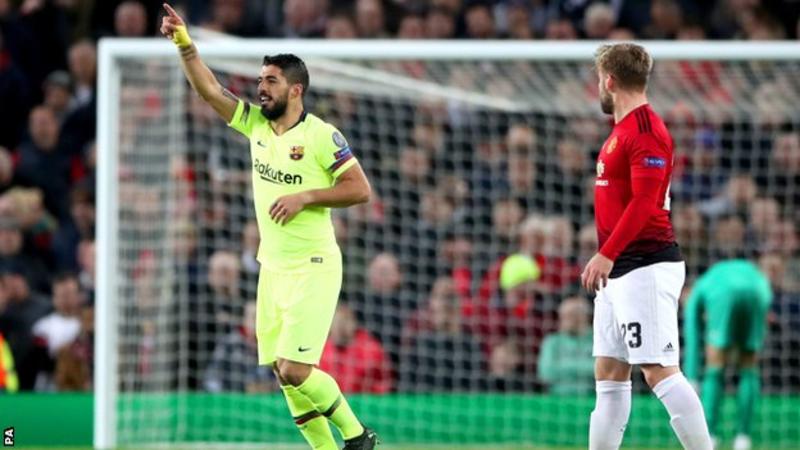 Barcelona, with superstar Lionel Messi quiet by his standards, were nowhere near their best but secured the win after Luis Suarez’s far post header from the Argentine’s pass deflected in off Luke Shaw in the 12th minute and was confirmed by the video assistant referee after initially being given offside.

New Manchester United manager Ole Gunnar Solskjaer can take heart from his team’s great endeavour but opportunities were at a premium, the best being a first-half header from Diogo Dalot that he directed off target. In fact, United did not muster a single shot on target.

Barcelona still posed a threat, with David de Gea saving from Philippe Coutinho and Messi – and United must now repeat their last-16 heroics against Paris St-Germain in France when they travel to the Nou Camp chasing a semi-final spot against Liverpool or Porto.

Manchester United’s players took the applause of Old Trafford – but it was an acknowledgement of a plucky effort rather than praise for any serious quality.

United had excellent performers, with youngster Scott McTominay delivering a performance of real maturity, but the bottom line was that they barely laid a glove on Barcelona all night.

And the frustration for the Premier League side will be that this should be regarded as a missed opportunity because Barcelona were light years away from their flowing best here.

This was the first time United have failed to have a shot on target in a Champions League game since March 2005, when they lost away to AC Milan.

Solskjaer and his side are left hoping for the same sort of miracle that saw them overcome a 2-0 home defeat to come through the last 16 against PSG – but lightning does not usually strike twice, Barcelona are a superior side and the Red Devils have won only once in the Nou Camp, when they beat Bayern Munich there in the 1999 Champions League final.

United will summon up those spirits but this is very much odds against once more.

Barcelona have glittered in the Champions League for years. This was a night for the grind and they got the job done. It was undistinguished, unspectacular, but done all the same.

Suarez got his goal but was only an intermittent threat while Messi occasionally flashed but was often on the margins, not helped by sustaining a facial injury in a first-half challenge by Chris Smalling.

Coutinho showed glimpses of the brilliance that made him such a precious commodity but this was a night when Barcelona played well within themselves.

There was little in the way of celebration from their players at the final whistle as they knew their performance was poor but it was still a giant stride towards the semi-final, and they will be satisfied by how they totally nullified United.

Barcelona 50% Through To UCL Semi-Final was last modified: April 11th, 2019 by Damilare Salami