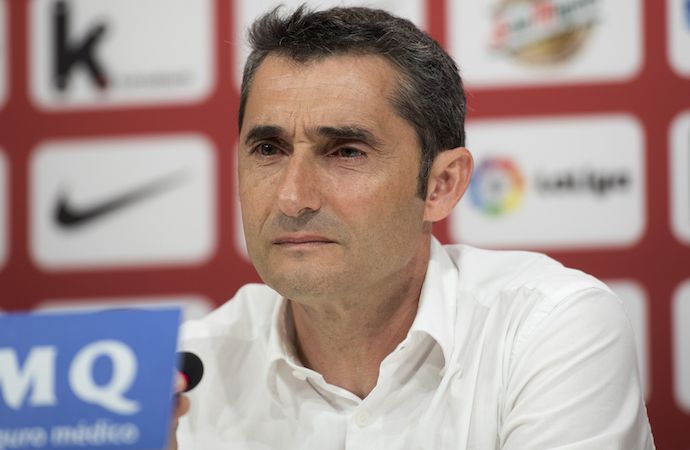 Ernesto Valverde knows that he’s stepped into one of the most demanding jobs in world football. He has returned to the Nou Camp as Barcelona manager, 27 years after ending a two-year playing stint with the Catalans as a forward in which he helped the club secure the Cup Winners’ Cup and Copa del Rey honours under Johan Cruyff.

The 53-year-old Spaniard takes the reins from Luis Enrique, another former Barca player, who indicated in March that he would be a taking a year’s break from management.

Valverde led Atletico Bilbao to seventh place in La Liga and a place in the Europa League this season in his second stint with the Basque outfit. He is Bilbao’s long-serving coach, overseeing 308 games, and picked up the 2015 Spanish Super Cup, ending the club’s 31-year wait for a trophy, along with seeing them through to European qualification in five of his six seasons.

Capped once by Spain as a player, Valverde also managed Villarreal, Valencia and Barca’s city rivals Espanyol, but his most successful tenure as manager, however, came with Olympiakos in Greece, where he led the Piraeus outfit to three league titles and two cups.

Barcelona President Josep Maria Bartomeu, said: “Valverde has the ability, the judgment, the knowledge and the experience. He promotes the youth players and he has a Barça way. He is a hard worker and he is a fan of using technology in training and in managing matches.”

Valverde will arrive at a Nou Camp still recovering from the disappointment of losing their La Liga title to bitter rivals Real Madrid and being ousted in the Champions League quarter-final stages by Juventus. He will be looking to bolster the Barca defence in the transfer window, with a new right-back and central defender the top priorities.

Although the Catalans did manage to win the Copa del Rey with a 3-1 thrashing of Alaves in the final on Saturday, expectations are perennially high at one of the world’s great clubs and Valverde will have a hard act to follow in matching Enrique’s haul of nine trophies in three seasons.

The new man will be preparing for a baptism of fire when his charges take the field for his first competitive game at the helm against Madrid in the first leg of the Spanish Super Cup at the Nou Camp in August.

Barcelona appoints new manager was last modified: May 30th, 2017 by Arinze Ago