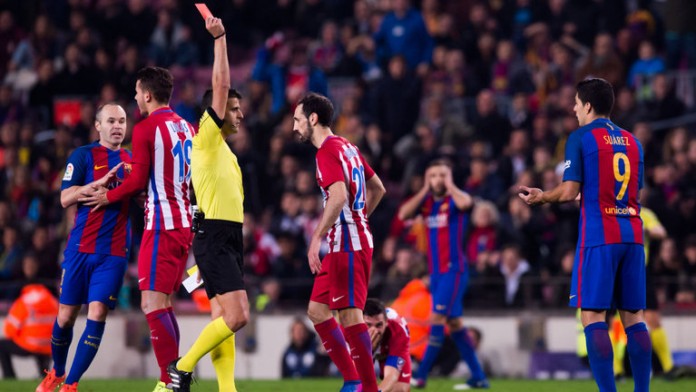 Barcelona will contest the red card which will rule striker Luis Suarez out of the Copa del Rey final.
Suarez was booked twice in Tuesday’s 1-1 semi-final second-leg drawagainst Atletico Madrid.
His second yellow, for catching Koke in the head late on, is the one they will appeal against.
The club are also contesting Sergio Busquets’ yellow card for kicking the ball off the pitch when there were two footballs on the field.
However, the midfielder is free to play in the final regardless of the appeal result.
Barca ended the game with nine men, with Sergi Roberto earlier sent off for two bookings.
Of his own red card, Suarez told Gol TV: “I’m laughing at that second yellow card, it’s not even a foul.
“I did absolutely nothing. It was what he [Koke] wanted.”
Meanwhile, defender Javier Mascherano suffered a left thigh injury in the same game, with the club saying they did not know how long he might be out for.