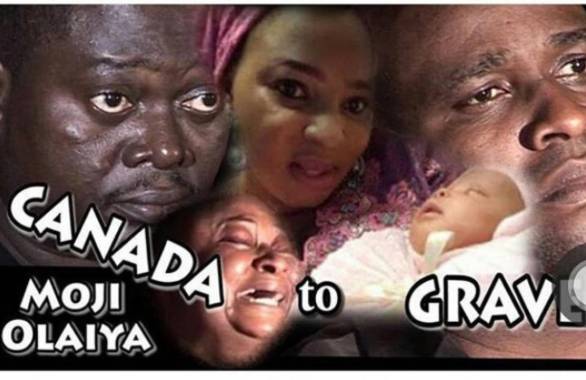 Going by the latest Information reaching City People Online these are definitely not the best of times for popular movie/music marketer, Gbenga Adewusi, as his company, Bayowa Films & Music released the burial video of late Moji Olaiya without her family’s knowledge. The veteran movie producer and marketer had posted video of Moji Olaiya’s burial on his IG page with the title ‘From Canada to Grave’; an act that has attracted cascading insults and media attack.

Although, the ace presenter had clearly written ‘Not for sale in every clip of the video, his followers believe that his desperate urge to make money out of every situation informs his distasteful choice of title

A Press Statement was again released to this effect by a movie group in Oyo State.

Ibadan Film Circle, a collective of professionals including actors, directors, producers and film scholars, is unanimously disturbed at the action of Mr. Gbenga Adewusi, an independent film marketer (Bayowa Films) who has been found to have made a production of the recording of the burial of the late ace actor, Ms. Moji Olaiya, with the intention of selling and profiting from the unathourised production.

The public will recall that Moji Olaiya died recently in Canada and had since been buried. Barely a month after the burial, a “documentary” titled “From Canada to Grave” has surfaced, sold and distributed by Bayowa Films. There is no indication that the grieving family of the late actor is aware of this production; neither is there any indication that the production is going to be only for charity or support purpose.

By this act, Mr. Adewusi’s company has done something provocatively unethical and criminal worthy of sanctions by all stakeholders in the Nigerian creative arts industry. In its entire concept, the project is obnoxious and dehumanizing, just as the “documentary” is inappropriately titled – absolutely spiteful, vulgar, careless, sarcastic and gloating, as if Ms. Olaiya’s predicament was self-inflicted and therefore worthy of jest.

We believe that, unless otherwise determined by her immediate family, the video of Ms. Olaiya’s burial is legally the private property of her estate. It is absolutely distasteful and brutally wicked for an enterprise like Bayowa Films, its owner(s) and collaborators to engage in acts which tend to show them as reaping from the sweat, sorrow and tears of others.

IFC condemns Bayowa Films production of Olaiya’s burial ceremony for commercial purpose. IFC calls upon all well-meaning practitioners, including members of TAMPAN, NANTAP, etc, and members of the public to join in condemning the wicked opportunism of Bayowa Films and others who are in league with such a heartless production.

IFC is committed to contributing to the education of the film sectors of the Nigerian creative industry. We use this opportunity to reject the idea of free but uncivilised market practices where anything goes, where professional decorum is only secondary to the scramble for wealth”