This is the shocking moment a BBC journalist pushed a woman away by the breast when she interrupted a live interview and the woman immediately hit him for the unintentional assault. 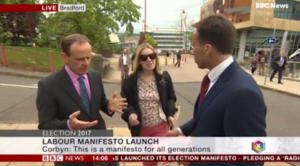 Ben Brown was interviewing assistant political editor, Norman Smith, in Bradford when a woman came into the frame, standing between both men. She said “absolutely fantastic” then gave a thumb up sign at the camera.

When she made no move to leave, Ben pushed her away while still concentrating on Norman, so his hand landed on her breast. Obviously startled by his action, the woman hit him on his shoulder before she walked away, looking embarrassed.

Both Ben and Norman carried on the interview in a professional manner, as though nothing had happened. Later, the clip went viral on Twitter with users criticizing Ben for the way he handled the situation. Eventually, Ben had to put up a Tweet to address the incident.

BBC journalist mistakenly pushes woman by the breast when she interrupts live TV interview and she hits was last modified: May 17th, 2017 by Reporter