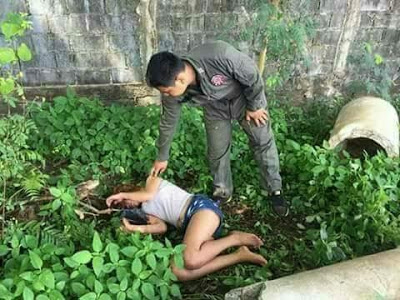 A young Thai woman has been saved by the police after she was found unconscious in some roadside undergrowth. She was rescued after her photos were posted on Facebook by a man identified as Jakchai Banyensakul who revealed that that police on the scene gave the girl first aid and found a used condom beside her body.
The condom it was gathered contained semen which showed the user might have had s*x with the woman. The woman said later that the incident had happened in the middle of last week. She had been out drinking with friends and was in fact used to taking alcohol as she worked in a bar.
She thinks she may have been drugged then possibly raped by a friend of a friend who she met. Police are looking for the man she met that night to see if a crime has been committed. Sanook reported on the case without giving details as to where the incident occurred. Many people online said it served as a warning about drinking and the possibility of being drugged. Thaivisa notes that in many countries s*x with a drunk person can result in a rape conviction as a person could be shown as unable to give consent while under the influence of alcohol. Beautiful Young Girl Found Unconscious at a Bush With Used Condom By Her Side (Photos) was last modified: July 11th, 2017 by Arinze Ago