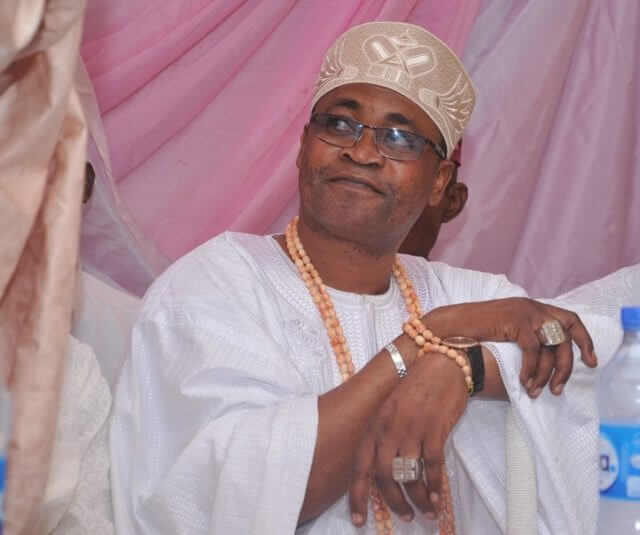 You can’t just see them at events and not watch in admiration the intimacy they share. Taking a second look at them, you will notice that they look strikingly. They look so much alike. They have the same fashion signature. Their royal caps are always the same. They also rock same attire to parties.

Their closeness has also made their wives to be very close. Ask the 2 Olooris of Oba Kolawole (Olowode) and Oba Fatai Akamo (Olu-Itori) you will be told that their husbands always talk to each other for over 20 times a day.
Last week, City People’s Assistant Society Editor, ABIOLA ORISILE, had an exclusive interview with the two Obas where they spoke on how they became close as young boys in Lagos.

Why you celebrating your father’s younger sister’s 5 yrs remembrance today?

Let me first say here that there is a reward for all good deeds. The reason I am celebrating Mama is because of her good behaviour. When I was about being made king and the oracle was consulted, she was the only one who spoke the truth. Before my ascending the throne, I have never met Iya Jesu but I met her first daughter in Lagos when I was still very actively involved in my company. I assisted her with her trip to America. I didn’t even know she was my sister. In my time of need, Mama stood by me despite that she was not bouyant. She believes so much in service to humanity. Mama Jesu is just as my mother. She can give all she has out.

When I was much younger, I didn’t know the significance of that, but after sometime, I knew giving pays. My late mum would, give out our little offering even when we didn’t have much. So, when Mama’s daughter said she wanted to have a 5 years remembrance of her mum, I felt there was need for me to remember Mama Jesu.

Yesterday, we had a special Muslim prayer where we played host to the Muslim community. If not for the rain, I would have been at the church. So, the good deeds of everybody do live after them. So, it is good to remember the dead who were good. I thank God for the life of Risi and her sibblings.

Why do you think is good to give?

We have to give because it is because of those who don’t have that God gives you. My mother made me to know that even if you don’t have much you must pay your Zakat, or tithe. You must give to put smile on people’s faces.

Away from Mama, you are very close to Olowode Egba and you attend events together, how did your paths cross?

Let’s give thanks to God. For your information, the relationship between Kabiyeesi Olowode and I, dates back to over 30 years ago. We are both from a poor background, but with God on our side, we were able to achieve the unachievable. Olowode Egba, Oba Kola Sowemimo and I met as young boys at the Airport in Lagos. He was a young Custom Officer, while I was a member of the flight crew. Mostly, Customs do brag that they are richer, flight crew are Air Crew while Customs are land crew. You know what custom will work on will come from the flight.

Funny enough, as young as we were then, we were socialites. On a very good day, I did everything possible to make sure he became King. Then he travelled abroad and lived in New York. I also stayed in United Kingdom.

Despite that we were both far away, we do communicate. In 1995, I came back to Nigeria and founded my agency and he gave me clients. Now, my wife and his Oloori are so close.

Oloori said the only man who Kabiyeesi talk to on daily basis is Oba Sowemimo, Is it true?
Yes, he is brother Kola. He is my pal. We talk 10/15 times a day. It is the birds of the same feather that flock together. I don’t use to believe in long friendship until I met him. My wife knows that. But the issue of Alayeluwa Oba Kola Sowemimo to me is like a bond. We are of different parents but very close.

If I am annoyed, he easily calms me down. So, if the house is not settled, my wife calls him, he would just crack a joke and the tension comes down. If he is not an Oba, he would have been a comic actor. He doesn’t stress himself. His thinking is very positive. Kabiyeesi is a kindhearted person.

You call him brother Kola despite being a paramount ruler, why?
Yes, we like each other and respect each other too. I call him brother Kola and he calls me “Oga Mi” (My Boss). We respect each other. The problem in Nigeria is lack of love. That is why a president will be sick and people will wish him dead. Is that love. In UK, when a Briton wakes in the morning, he says God bless the Queen. In US, they say God bless America. So, our relationship is based on love. When God elevates another person, embrace the person. God will not forget you too and he will bless you for embracing the person he blessed.

How long have you been on the throne?
I have been on the throne for close to 15 years. I was crowned on 25th February, 2004, so by February next year, I will be 14 years on the throne. So, our plan is to go to Kabbah with about 10 people and pray for 10 days.

It will be a marathon prayer, so that God will give us the energy to plan for 15 years on the throne. Being on the throne for those years is not an easy joke but with God on your side, it becomes an easy thing. With God all things are possible.

You are a very strong believer of your faith, Islam, how do you balance this with the traditional belief?
It is instinct. When you reach a certain stage and position, instinct will decend on you and you will know how to go about some issues in life. God Himself said we should seek knowledge. God didn’t say we should look for money. So, for you to able to stand the test of time, you must seek knowledge.