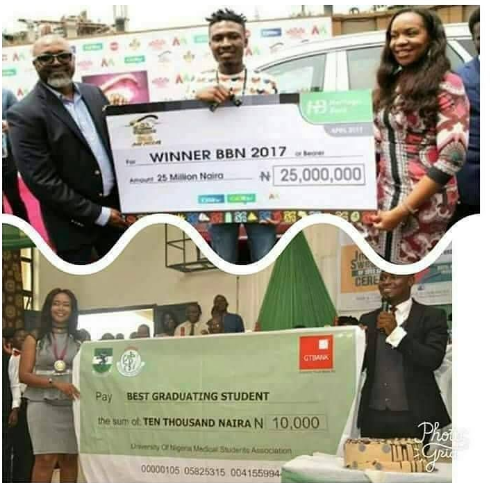 Comedian Seyi Law has weighed on the viral collage photo of the prize money of Big Brother Naija 2017 winner, Efe and a best graduating student from UNN.
The photo got several people talking yesterday, as most people are now saying with the above photo, education is no longer the key to success. Read Seyi law’s thoughts below….

“I saw this picture and read a lot of comments on it and I had a good laugh. We don’t seem to realise that BBN is business that brings returns and profit to the organisers while Prize giving is just a CSR for the giving party which is not compulsory by any means.

We talk about how Educational events gets less sponsors and low reward prizes and we blame everybody but ourselves. May I ask when last we watched ” Who wants to be a millionaire”? Oh ho!
If we are truly pained, let’s develop an Education based entertainment show that can guaranty millions of viewership, following and bring in good returns and watch companies eat out of the palms of our hands until then, we will keep crying for nothing.

Abi, we think say the shareholders of the companies won’t want to count profits and improved dividends? Abegi, make I continue with my snoring jor.”