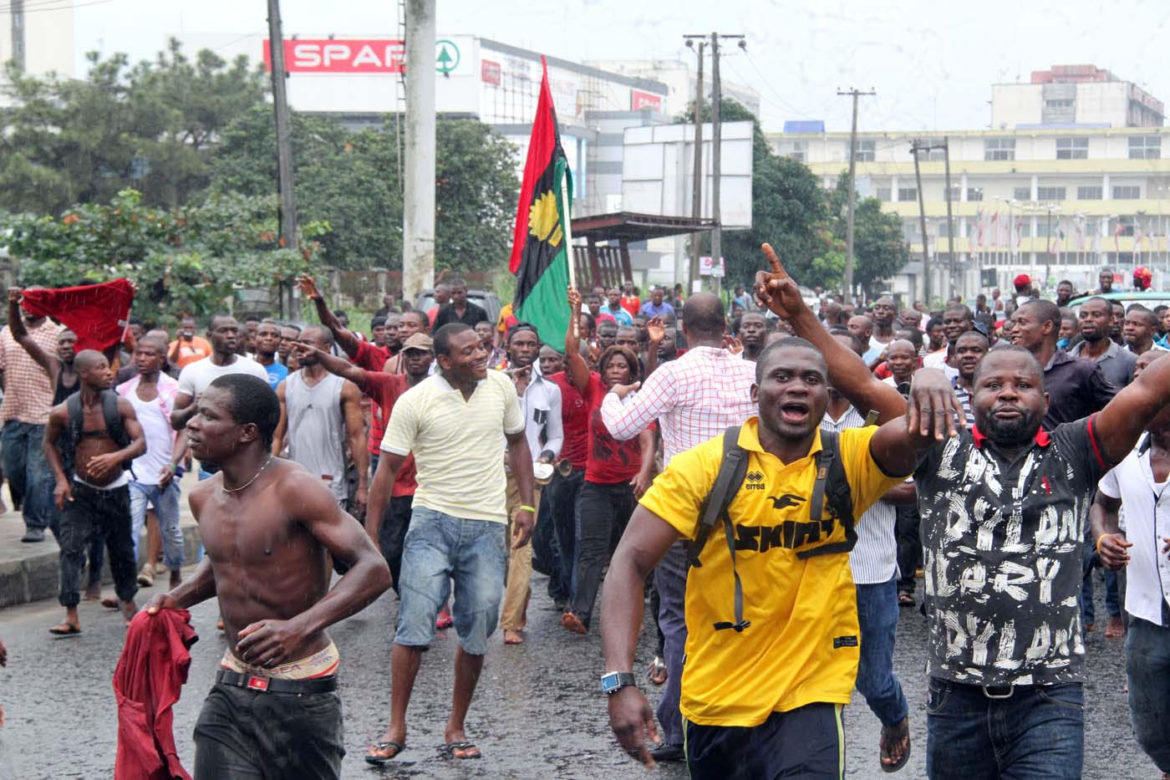 The Indigenous People of Biafra, IPOB, has warned that the continued detention of its leader, Nnamdi Kanu will spell doom for Nigeria.

The group threatened that Nigeria will continue to boil if Kanu is not freed.

This is also as the group claimed that more damning videos would soon be removed to nail some former military leaders.

IPOB, in a statement by its spokesman, Emmanuel Powerful said the embattled Kanu would soon open up on the conspiracy and genocide committed against Igbos.

His statement reads in full.

“The Indigenous People of Biafra, IPOB, worldwide and it’s leadership warn the people of Nigeria and it’s president Muhammadu Buhari of the dangers ahead for Nigeria and himself for his dictatorial style of leadership.

It is crystal clear now to the whole world that IPOB leader Mazi Nnamdi Kanu who threatened during his last court appearance to expose truths that will sink Nigeria has started doing so.

By releasing the latest video showing the grand conspiracy on the part of Gowon and the British to commit premeditated genocide it is apparent that he intends to live up to his promise to sink Nigeria with hidden truths which the world does not know exist.

The exposè will continue unabated with more compelling revelations to follow in the coming weeks. All the hidden secrets of the atrocities and crimes against humanity committed against the people of Biafra during the war of genocide in 1967 to 1970 will become the most talked about topic within diplomatic circles around the world until Nigeria collapses.

These revelations will not stop until the likes of Gowon, Buhari and others are carted off to the Hague to face trial for crimes they committed against humanity.

Mazi Nnamdi Kanu is prepared to sink Nigeria with the truth hidden from public that people around the world have never heard before about Nigeria and the amalgamation in 1914 by British merchants.

This was what he meant when he said that he has evidence to sink Nigeria if allowed to give testimony in court. Many more evidence are presently being compiled by his team of researchers in Europe that is about to explode in a very short period.

On the 10th of January 2017 men and women of good conscience around the world should come and watch the court proceedings between the leader of the Indigenous People of Biafra IPOB, Director Radio and Biafra Television Mazi Nnamdi Kanu against Justice Binta Nyako and her fellow Fulani brother the President of Nigeria, Muhammadu Buhari.

We state categorically that IPOB family members are everywhere in the world. There is no corner of this earth you will go to without finding the presence of a well organised and drilled IPOB family through the teachings of our leader and prophet of our time Mazi Nnamdi Kanu.

Buhari and co must therefore come to the realisation that he is wasting his time and destroying Nigeria along with the likes of war criminals like Gowon and himself if he continues to hold our leader Mazi Nnamdi Kanu.

He is beginning to discover to his horror that Mazi Nnamdi Kanu is neither MKO Abiola, Ken Saro-Wiwa or Isaac Adaka Boro all men fighting for their freedom who were killed by the Nigerian state.

Those advising Buhari against the continued detention of Mazi Nnamdi Kanu will be consumed by the fire they are now stoking. These cabals should remember the aftermath of the assassination of Archduke Ferdinand and how many millions died as a result of the First World War that followed.

Before the upcoming court appearance on the 10th of January 2017, the leader of the indigenous people of IPOB mazi Nnamdi Kanu has released another explosive secret about Biafra genocide hidden from the world for nearly 50 years.

It is believed his team of lawyers and researchers in Europe are the ones responsible for this selective leaks to coincide with his court appearance.

Plans are now underway to circulate this latest damaging evidence to world leaders, every leading human rights organisation and the United Nations. All will be sent a copy of this evidence of premeditated genocide carried out against the Biafran people by the likes of Yakubu Gowon, Olusegun Obasabjo, T. Y Dajuma and Muhammadu Buhari.

These cold blooded killers that parade themselves as Nigerian leaders must be tried for crimes against humanity at the Hague.

Nigeria and her supporters must be made aware that IPOB is not a toothless socio cultural organisation like Ohaneze Ndigbo that failed to live up to its responsibility to protect their people by dinning and singing with mass murderers like Gowon; neitheir is IPOB any other meaningless Biafra agitation group that can fold its hands and watch their members slaughtered by the regime of Olusegun Obasanjo, Achike Udenwa and Peter Obi.

At IPOB we pursue our enemies and will keep pursuing them until they are brought to account. We will not relent until Buhari, Gowon and all those responsible for the brutal and evil mass murder of Biafrans from 1966 to date are behind bars.

Along with our leader mazi Nnamdi Kanu, we are prepared to make whatever sacrifice is needed in order to ensure that those that killed Biafrans in cold blood because of crude oil and gas from our land is jailed and Biafra restored this year 2017.