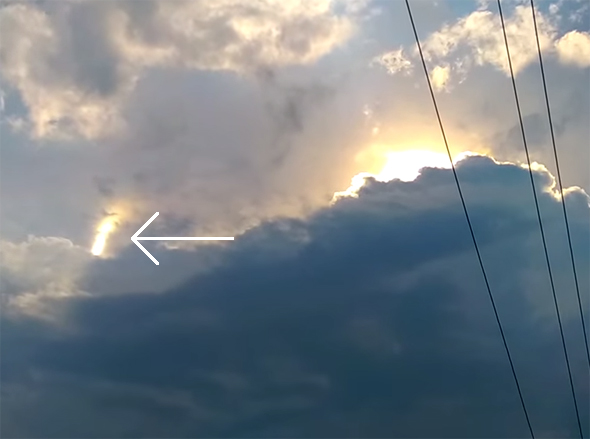 YouTube user, QuadeM13 was out riding his bike and noticed a strange light beam flashing and twisting around above a cloud. He stopped and took some video of it, and it’s, well, really really weird (warning, some NSFW language is muttered therein)

This is probably one of the strangest things you’ll ever see in the sky, if you actually get a chance to see it in person. If you do — don’t be alarmed! It is not aliens making camp in the cumulus overhead, despite all signs that point to the contrary.

It’s actually a crown flash, which occurs when ice crystals in high clouds all line up to focus and reflect sunlight into a pillar-like shape. Then when the ice crystals change their orientation quickly, the pillar appears to dance, or even dissipate entirely.When we find ourselves approaching storm clouds, most often, our first thought is to get as far away as soon as possible. However, one bicyclist was so intrigued at what he saw before his eyes, he stopped and pulled out his phone to record the phenomenon.

What the resident in Greenwood, Indiana was witnessing was a crown flash, a rare event where sunlight shines on ice crystals guided by electric fields during a thunderstorm. This occurrence is usually not seen by the naked eye. Because the sun was still out when it happened, the video the bicyclist captured is truly a once-in-a-lifetime event.

So what is this thing? An alien beacon? Thor going back to Asgard?

This Biker Had To Pull Over And Start Filming… His Footage Is Creating A Lot Of Controversy was last modified: May 24th, 2017 by Reporter

How Can You Improve Your Oral Sex Skills? Popular Therapist Shares Secrets