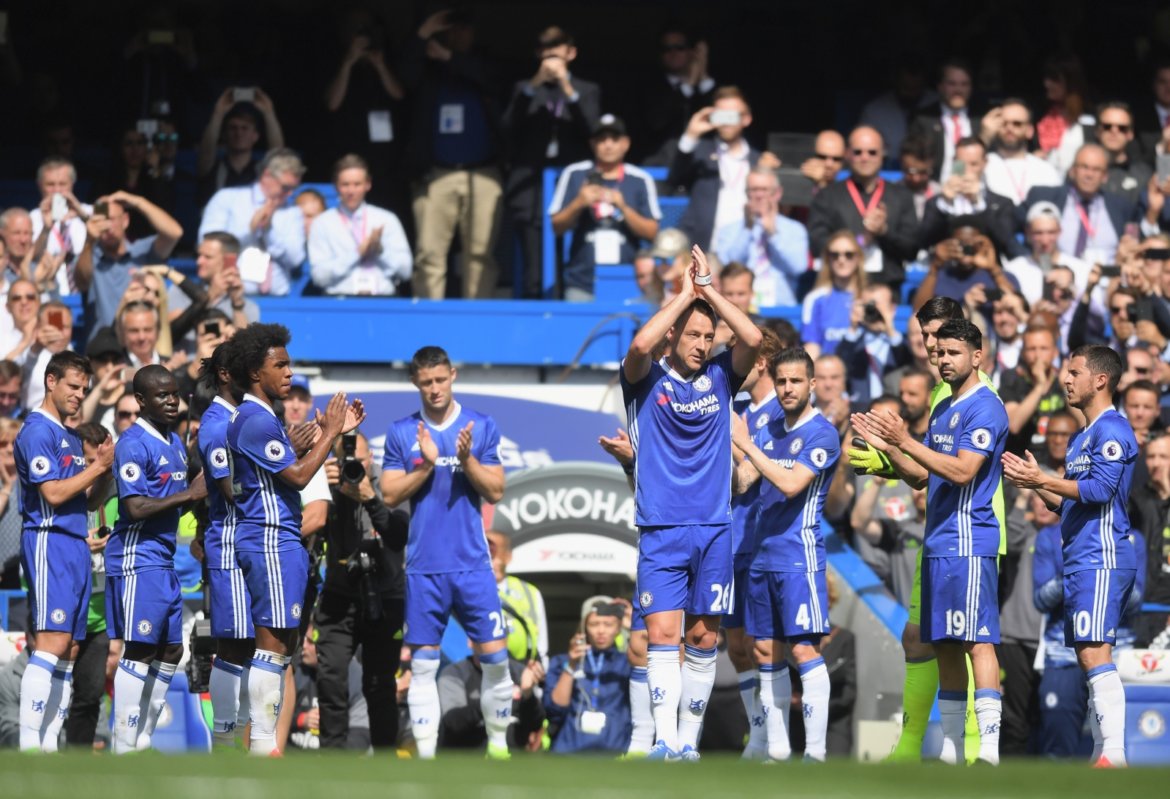 Stamford Bridge stood in awe and celebration on Sunday as captain John Terry waved the entire Chelsea side goodbye by lifting the Premier League trophy in Antonio Conte’s record-breaking first season in charge.
Terry, having spent 22 years at the club and 13 as captain, started the final league game of the season and wept as fans sang his name after unfurling banners describing him as “captain, leader, legend”.
In a piece of sentimental theatre, Conte substituted Terry with his successor as captain Gary Cahill in the 26th minute, his shirt number of the 5-1 win over Sunderland and the emotional 36-year-old hugged teammates who formed a guard of honour as he left the pitch to a standing ovation.
Terry, who may earn a last run-out for the club he joined as a 14-year-old schoolboy at the FA Cup final at Wembley next Saturday, merited a supplement in the match programme handed out for free at the ground. He has made 717 appearances for Chelsea.
The visibly emotional former England captain thanked owner Roman Abramovich, the supporters, his wife and children as well as staff and players in an address at the end of the game.
He said Sunday was “one of the most difficult days of my life”.
“You are the best supporters in the world,” he added.
“Thank you will never be enough but I will be coming back here one day and I love you all from the bottom of my heart,” he said, his voice cracking. He then hugged Conte and passed the microphone.
“He’s been fantastic and very important for me and the players,” Conte said while Cahill called him “the best centre half in Premier League history”.
It was Chelsea’s fifth title since Abramovich bought the club in 2003. During that time the club have also won four FA Cups.
However, it was a tough day for relegated Sunderland who finished the season bottom of the league on 24 points compared with their hosts’ 93.
They did, though, surprise their hosts in the third minute by scoring their 29th goal of a miserable season, a rebound by Javier Manquillo.
Chelsea responded by battering the beleaguered Sunderland goal, finishing with five — from Willian, Eden Hazard, Pedro and two by Michy Batshuayi in the dying minutes.
They became the first Premier League side to register 30 victories in one season.