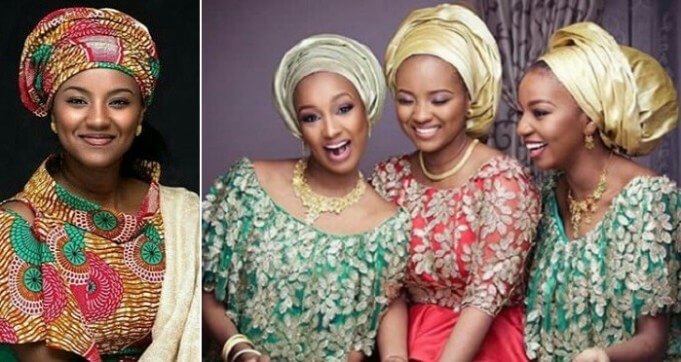 •On The Same Day, JUNE 29 In MAIDUGURI
As you are reading this, preparation is in top gear at the palatial mansion of the Borno Billionaire, Alhaji Muhhamed Indimis as two of his beautiful daughters will be walking down the aisle in the next couple of weeks. Yes, we can confirm to you that Hauwa and MeramIndimi will be tying the knot amidst pomp and pageantry come 29th of June, 2018 in Maduguri.

The high octane wedding is one of the most talked about wedding in Nigeria presently as the Borno Oil Guru is leaving no stone unturned to make sure his 2 daughters have the biggest wedding in town. Not only is everything set, best hands in event planning and management have already been consulted to take care of the large guests who will be storming the Indimis mansion to witness the event.

Of course it is not strange that Hauwa and Meram will be saying “I do” to northern rich sons because the Indimi are known to be married into prominent Nigerian families. So Hauwa who is one of the most popular of the Indimi daughter will be marrying Muhhammed Yaradua, the son of Late M.D of NNPC.

Muhhammed Yaradua is in his late 20s and he is not just born with a silver spoon, he is also doing so well for himself. His beautiful bride, Hauwa runs an online boutique called House of Hauwa, in Boca Raton, Florida. She is a graduate of Lynn University, Florida, and loves the good things of life. She is also behind Kulu Vlogs, a lifestyle, travel and time-to-time beauty tutorial Video Blog. Hauwa Indimi may be the youngest of all the indimi daughters but she is one of those who have carved a niche for herself as a celebrity fashion blogger.

Same Day in June, pretty fair Meram who is also the daughter of Indimi will also be joined with his handsome boo, Abdulai Dallatu. Not only is she super excited, Meram shared her diamond engagement band, on her Instagram page, she also revealed that it is worth 10 million naira.

Though the celebrities may be getting hooked same day, that wedding will surely shake the entire Northern social scene. The beautiful brides have been travelling forth and back to get the entire luxury brand that is needed to have a high societal wedding.

The wedding at Eko in Victoria Island is expected to parade many Northern Governors and politicians. This is because Alhaji Muhammed Indimi is highly connected. He is an in-law to Nigeria’s President, President Muhammed Buhari. One of his sons is married to Zahra Buhari. He is also very close to Former Military Ruler, General Ibrahim Babaginda.

Don’t forget that Dr. Alhaji Dr. Muhammadu Indimi is the Executive Chairman and Chief Executive Officer at Oriental Energy Resources Limited. He is the Founder of Oriental Oil & Gas. He has over 20 years’ experience in the Nigerian Upstream oil and gas sector. Dr. Indimi is an astute business man with a notable presence in the international business arena. He is a founder of many successful indigenous companies and sits on the board of several privately owned companies encompassing all sectors. He is also one of the rich billionaires on the Forbes list.

A philanthropist of notes, Few years ago, Alhaji Mohammed donated N4.2billion to Lynn University in United state. He even has a block named after him at the University.
Penultimate weekend, he was sighted at Africa’s Richest man, Alhaji Aliko Dangote daughter’s wedding. He was not alone as his beautiful wife was also in attendance. Hi s seat was flooded by many a-list northern celebrities who came to congratulate him on the forth coming wedding.