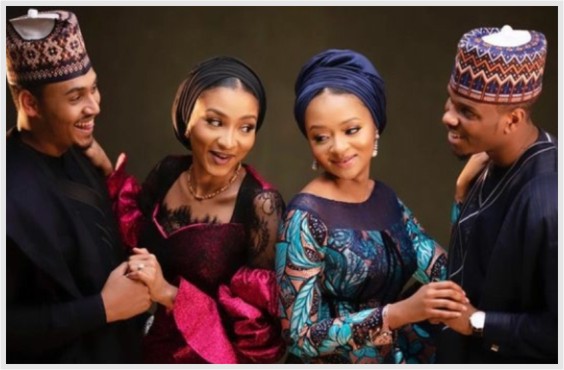 •On The Same Day

In the last few weeks, rich Northern celebrities have been staging big weddings for their wards and there is, no doubt, that a huge sum of money was spent to throw classy weddings. The weddings literally shook the whole of the Northern hemisphere to its foundation as many rich kids tied nuptial knots according to Islamic rites.

It was in line with the trend when Borno billionaire, Alhaji Babagana, and his wife, Hajia Babagana, gave out the hands of their 2 daughters in marriage to their spouses. It was one wedding which literally shook Abuja as the couples getting married are from the Kanuri ethnic group.

The Hausa Marriage ceremony is always a 3-day rite as it always kicks off with ‘Nikkai‘, which always takes place in a mosque,. On that day, dowry is paid and Hausa tradition sometimes doesn’t allow the female to participate in the rite. The second day is ‘Kamu‘ (beautifying of the bride with Henna). This is the day the brides will transform her look for the groom family to appreciate her beauty. The 3rd one is ‘ Fathia which is an avenue for the groom and bride families to mingle, while they wine and dine. This is what we call the wedding reception and many Hausa millionaires who have enough to throw around set aside the 3days to honour their kids as they walk into that institution called marriage.

The tying of the beautiful knot between the couples may have come and gone, but the memory still lingers on in the minds of the important guests who flew to the northern city for 2 days on Dec 31st 2020 and January 1st 2021, because it was termed as one of the classiest and most expensive wedding by any Nigerian in Borno which capped the year 2020 and ushered in the new year.

Everyone and everywhere was a buzzing for the prep of the wedding and the families into which his children were marrying did not do less as they also spared no cost to give their children a superlative wedding.

Many of those who got invited had only one thing to say, about the wedding is ‘’a double-barrel northern society wedding of the year”. They even insinuated that there has been no wedding even in recent times that could match it in terms of sheer extravagance & opulence because of the three families involved.  The money spent and all the big vendors who participated in the wedding were evidence of opulence. Close to 200 guests flew to the city to honour the parents as the wedding lived up to expectation.

It was a classy northern party where all the “BIG MEN” gathered to celebrate with the couples and their parents. Amongst the big celebrity at the wedding were the Governor of Borno State, Babagana Umara Zulum and a former Borno Governor, Kashim Shettima. The high-class traditional engagement known as Kamu in Hausa and classy reception witnessed who is who from the political class and many other big celebs especially from the north.

These celebrity sisters are popular on the northern social scene and well connected, owing to the status of their parents. No wonder, they also got themselves husbands who are also sons of rich northern men. The wedding had a rich Kanuri culture touch as all traditional rites were performed. Fatima and Tauhida glowed in their different expensive outfits for all the ceremonies including the cocktail party. It was one wedding which was synonymous with a Arabian/ Moroccan-inspired royal styled wedding because it was very colourful. The wedding hashtag, #thaf21 went viral a few minutes into the ceremony and many who could not attend also had a feel of the day on their social media pages. The brides, Fatima and Tauhida glowed in Pink and Red couture dresses respectively and a golden tone frocks for their reception. The brides mothers also glowed in coral outfits.

Top vendors who made the event happen were Blue Velvet Marquee, which handled the decoration of the venue. She was also the one who handled the private presidential wedding of Hanan Buhari and the Indimi daughter. Fatima and Tauhida’s wedding took place at the Blue Marquee velvet garden. The wedding coordination was done by exquisite Luxury Events. Photography was by Bedge Pictures, videography by Wrgoimagery, Dj was Djgabby, makeup by Dazeita, outfit by Fattush. The cocktail party décor boasted over 5000 balloons, it was handled by Abuja party décor, Ballooonbarbv. Some of the celeb rich kids and their parents at the wedding were the Salhijo families, the Waziri Clans led by Hajia Waziri, Aminu Waziri, Ahmed Waziri, Abubarka Waziri, the Dantatas led by Hajia Zainab Dantata, Aminu and Aziza Dantata, Zarah Kuchazi, Yasine Sheriff, Amina Fadul, Mariri, The Babaganas led by Hajia Babagana, Umar Babagana, the Bunu sisters, Hillu Alli, Mariya Sanusi and many others.

READ ALSO: COVID-19: WHY THE RICH WILL CONTINUE TO DIE!

COVID-19: Why The Rich Will Continue To Die!