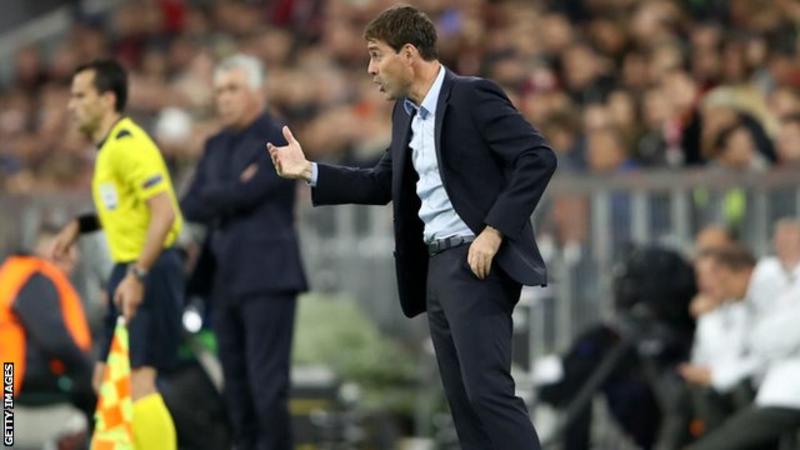 Coach Rene Weiler has been fired by Anderlecht just nine days before they face Celtic in the Champions League.
Assistant managers, Thomas Binggeli, Nicolas Frutos and David Sesa will take over from the 44-year-old temporarily.
Belgian champions, Anderlecht trail Club Brugge by nine points in the Belgian First Division A.
Meanwhile, German club Wolfsburg have sacked Andries Jonker, a former Arsenal academy boss, and replaced him with former Mainz manager Martin Schmidt.
The Dutchman became the first manager to be sacked in Germany’s top flight, having secured only one win from four games in the Bundesliga this season.
In Spain, Alaves head coach Luis Zubeldia, 36, became La Liga’s first managerial casualty.
Alaves are at the  bottom of the Spanish top flight after losing their opening four games during which they failed to score a goal.
Anderlecht host Celtic in the Champions League on 27 September, having lost their opening Group B game 3-0 to Bayern Munich last week.
A statement on Anderlecht’s official website thanked Weiler – the man who led the club to their 34th league title last season – “for his commitment, his services, and his professionalism”.
The Premier League lost its first manager of the season when Frank de Boer, 47, was sacked by Crystal Palace last week.
He was replaced by former England manager Roy Hodgson but it failed to instantly inspire Palace as they lost 1-0 against Southampton on Saturday.
After leaving Arsenal’s academy in February, Jonker kept Wolfsburg up last season but Saturday’s 1-0 defeat at VfB Stuttgart proved to be his last in charge of the 2009 German champions.
His assistant, former Arsenal midfielder Ljungberg, has also been fired along with Jonker’s entire backroom staff.
A statement on the club’s official website said the decision was made following a “perception of stagnated development”.
“The decision to make a change of head coach at this early stage of the season wasn’t easy for any of us,” the statement said.
Later Wolfsburg sporting director Olaf Rebbe said on his club’s website: “I’d like to thank Martin Schmidt for agreeing to take over at such short notice. We are convinced that, with his experience and strengths, he will fit right in.”