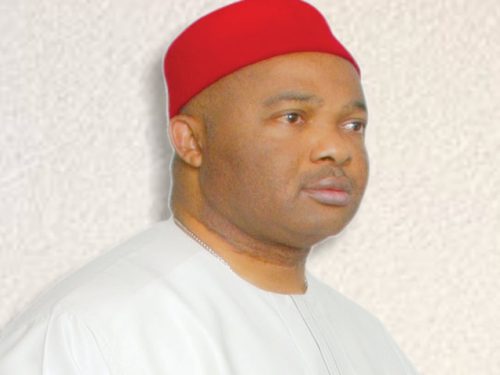 The apex court has declared Hope Uzodinma of the All Progressive Congress (APC) as the winner of the March 9 governorship election in the state. Uzodinma originally came fourth in the election.

The seven-member panel of the Supreme Court led by Chief Justice Tanko Muhammad gave the unanimous decision on Tuesday in Abuja.

PREMIUM TIMES reported how the apex court earlier on Tuesday dismissed the appeal of Uche Nwosu, the candidate of the Action Alliance in the election. Mr Nwosu, who came second in the election, withdrew his suit which led to its dismissal by the judges.

Mr Nwosu withdrew the suit because the Supreme Court had last December ruled he was not a valid candidate for the election.

In the election held in March, Mr Ihedioha of the PDP was declared winner.

Mr Nwosu is the son-in-law of the then governor, Rochas Okorocha, who strongly backed his candidacy.

The candidate of Accord and Mr Okorocha’s predecessor, Ikedi Ohakim, came distant fifth on the log with 6,846 votes.

Announcing the results of the election, the state’s returning officer and Vice-Chancellor of the Federal University of Agriculture, Umundike, Abia State, Francis Atunta, gave the total registered voters across the state’s 27 local government areas as 2,221,008 and the total accredited voters as 823,743.

A total of 70 candidates representing various political parties took part in the election.

Details of the reasons for Tuesday’s Supreme Court ruling would be provided in subsequent updates and stories.