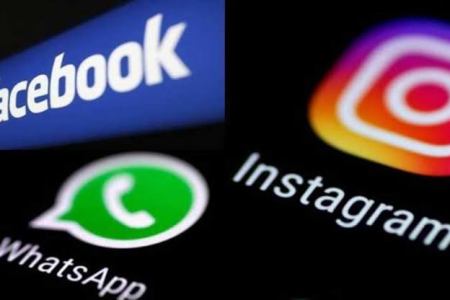 The three social media services, all owned by Facebook, run on shared back-end infrastructure, and other Facebook-owned services are also down, including Facebook Workplace and the Oculus website.

There have been a number of social media outages in recent months, with Instagram going down for 16 hours just last month, and all Facebook platforms down in June.

Soon after the first report came through, the hashtag #facebookdown was trending on Twitter, with users worldwide reporting issues connecting.

‘We’re working to get things back to normal as quickly as possible, and we apologize for any inconvenience,’ the executive said in a tweet.

The hashtag #instagramisdown and WhatsApp were both also trending on Twitter, with a number of users saying they checked their internet connection when they couldn’t get on Facebook.

Instagram comms tweeted: ‘Instagram and friends are having a little bit of a hard time right now, and you may be having issues using them. Bear with us, we’re on it!’

WhatsApp tweeted: ‘We’re aware that some people are experiencing issues with WhatsApp at the moment. We’re working to get things back to normal and will send an update here as soon as possible. Thanks for your patience!’

Even Oculus, the virtual reality gaming platform owned by Facebook was having problems, with one user describing their headset as being ‘like a paperweight’.

READ ALSO: 5 WAYS YOU CAN ENJOY SEX AS A COUPLE

5 Ways You Can Enjoy Sex As A Couple