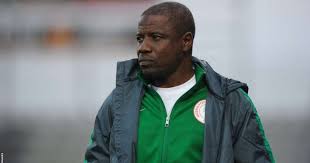 The embattled coach has also been ordered to pay a fine of $5,000 to the Federation within three months.

The decision to ban the Coach was reached by the Ethics and Fair Play committee chaired by Nuhu Ribadu (former EFCC Chief).

Salisu was caught on video in an undercover sting by a Ghanaian journalist assuring he’ll give two players (Osas Okoro and Rabiu Ali) game time in his team and collected $1000 from individuals posing as the players’ agents.

The Coach was also promised 15% of the transfer of the players when they secure deals away from their Nigerian clubs (Enugu Rangers and Kano Pillars).

The sting supposedly took place in the visitor’s Lounge of the Best Western Plus Atlantic Hotel, Sekondi-Takoradi in Ghana during Nigeria’s WAFU Cup campaign.

Salisu Yusuf maintains his innocence by arguing that the payment was a gift and insists the players were already part of his team for the 2018 CHAN.

In its submission, the committee gave Salisu Yusuf the grace period of three months to pay the $5000 fine but as at press time, Salisu has not reacted whether he will proceed to pay the fine or bow out of Eagles job.