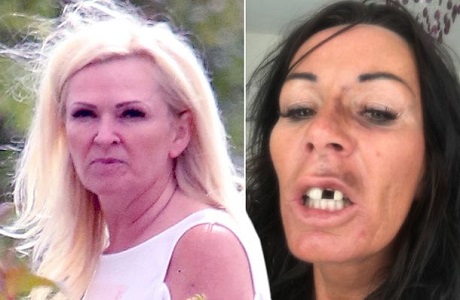 A jealous ‘bridezilla’ spent her wedding night in prison after she viciously attacked her best friend at her reception.

Jealous Audrey Stevenson left Veronica Bannon with a badly bruised face and knocked one of the teeth out when she grabbed her by her hair and banged her head to a door.

Stevenson later accused her friend of ‘making a move’ on her new husband Scott Allan, but Veronica insisted she had been imploring him to take his drunk wife home following a row between the couple.

Yesterday, Stevenson was spared jail as she was fined £450 and ordered to pay her victim £400 compensation at Livingston Sheriff Court, the Daily Record reports.

Speaking after the sentence, mum-of-four Veronica, 45, of Linlithgow, said she was “devastated” by the sentence – which she claimed “doesn’t seem like a punishment”.

She said: “I cannot believe that’s all they’ve given her.

“I’m devastated. I can’t believe she’s done so much damage.

“It doesn’t seem like a ­punishment. I’m lost for words.

“I feel it’s important for everyone to understand the impact this vicious assault has had on me and my family.

“First of all, the facial damage. I was dragged then lifted off my feet.

“She looked possessed. It was the scariest thing that could happen from a supposed best friend.

“I’ve had to visit hospital on several occasions and may still need possible dental surgery.

“I’ve been so bad with anxiety. I find every day a struggle and I’ve not been able to get myself to all appointments for the dentist.

“I am on tablets for anxiety, ­sleeplessness and pain.”

Livingston Sheriff Court previously heard that Stevenson, 46, and Allan, 55, of Bo’ness, West Lothian, were arrested and spent their wedding night in ­separate cells after police were called to the ­reception at the Star and Garter Hotel.

They also missed their honeymoon flight to Mexico despite having paid for a second ceremony in the sun.

Bride Punches Best Friend’s Teeth At Her Reception was last modified: May 11th, 2018 by Reporter