Buhari Address Traditional Rulers And Others In Zamfara 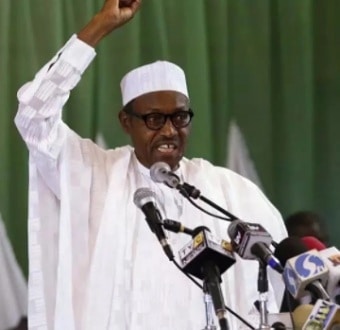 The President in company of his aides landed at the Gusau helipad at about 10.40a.m after taking off from Umaru Musa Yar’Adua international airport Katsina.

The governors of Sokoto and Kebbi states, Alhaji Aminu Tambuwal and Atiku Bagudu respectively, some cabinet ministers, traditional and religious leaders, top government officials were among those that received the president.

President Buhari reviewed a parade mounted by the Army and Air Force.

He is scheduled to address traditional rulers and other stakeholders during the visit, and condole with families and communities that suffered from various forms of violent crimes in the state.

Zamfara has witnessed cases of attacks by armed bandits with hundreds of innocent people killed and property worth billions of naira carted away or destroyed.

The recent attack by bandits at Birane village in Zurmi Local Government area of the state left over 50 people dead.

One of the most notorious bandits, Tsoho Buhari, popularly referred to as Buhari Daji, was recently killed by a repentant cattle rustler in the state

Buhari Address Traditional Rulers And Others In Zamfara was last modified: March 22nd, 2018 by Reporter