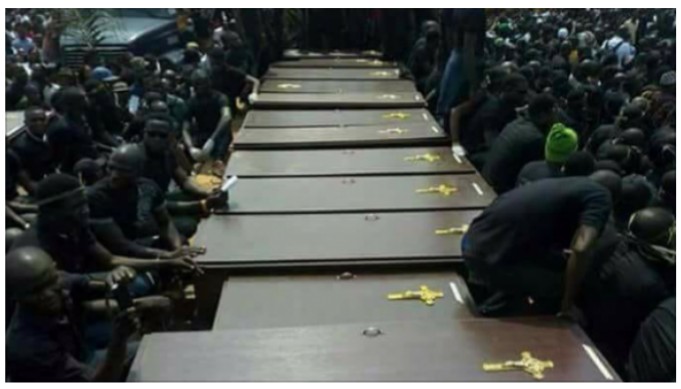 The Catholic bishop of Gboko diocese, Williams Avenya, has said that the people of Benue state gave massive support to President Muhammadu Buhari but “received 73 corpses in return”.

In his funeral oration for victims of herdsmen killings, Avenya prayed for the repose of the souls of the dead and called for prayers for the survivors of the attacks.

He also called on the government to beef up security.

Akpen Leva, chairman of the Christian Association of Nigeria (CAN) in the state, urged Benue citizens to unite irrespective of tribe, political and religious differences in order to tackle their enemies.

Leva described the attacks as a “genocide” that was targeted at exterminating the Tiv’s.

Lawrence Onoja, former military governor of Katsina state, described the attacks” a conspiracy against the indigenes” and said it would be resisted.

Also in a funeral eulogy, Joseph Waku, a former senator, said “enough is enough” to senseless killings in the state.

James Ayatse, Tor Tiv, alleged that the killings in the new year were signs of an ethnic cleansing agenda.

He said the persistent attacks on Benue communities were worrisome, especially since the federal government failed to prevent re-occurrence.

Ayatse said the herdsmen have attacked Benue 47 times in five years, attacks, saying the attacks were akin to an agenda of genocide.

“I, therefore, call on the federal government to act swiftly by putting an end to this killings; this act of impunity must stop,” he said.

He encouraged Samuel Ortom, governor of the state, to stand firm in his resolve to implement the anti-open grazing law, no matter the threats from the Miyetti Allah Kautal Hore.

The paramount ruler called for prayers for the dead and appealed to the media to report the carnage that had befallen the state.

Paul Unogo, a second republic minister, sounded a strong warning to the aggressors.

He said Benue indigenes who fought in the civil war to sustain the unity of Nigeria, would not continue to allow invaders to kill and maim their people.

“We are capable of raising a million people to defend our land if nothing is done to stop the killings. Enough of the killings,” he said.

Akaater Azera, one of the survivors, said the herdsmen came in the night while they were asleep and started shooting sporadically.

According to him, when his wife came out, the gun-toting men shot and killed her on the spot.

Azera added that when he ran out of the house, he was pursued, with machete cuts inflicted on his face and leg.