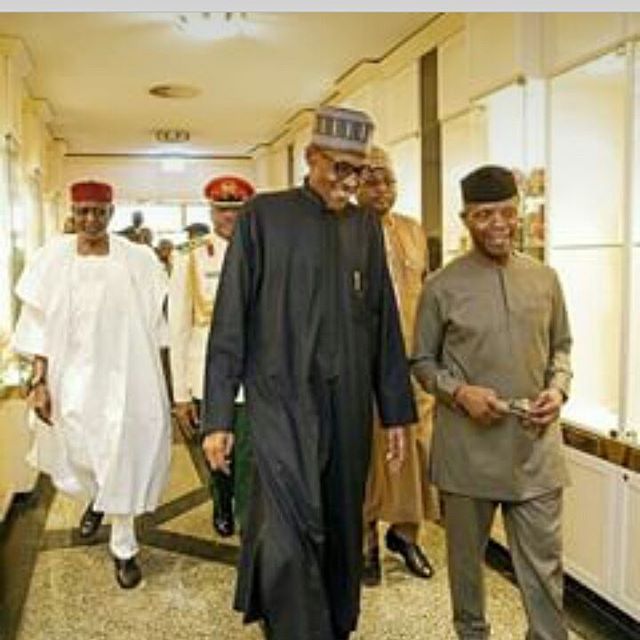 President Muhammadu Buhari has concluded plans for a major overhaul of his administration, reliable sources in government told SUNDAY PUNCH over the weekend.

The sources, who spoke on condition of  anonymity because of the sensitive nature of the subject, said the changes were going to be ‘earth-shattering’ because a few of the President’s powerful aides and prominent members of the administration would be affected. SUNDAY PUNCH’s findings also revealed that the Governor of the Central Bank of Nigeria, Godwin Emefiele, is likely to be affected by the changes.

A senior government official, who preferred anonymity said, “In the next few weeks, we are entering the second half of this administration. I can tell you that a major cabinet reshuffle is on the way.  Ministerial vacancies for Kogi and Gombe states would be filled, while there would also be an exchange of portfolios.

“Some junior ministers, whose relationships with their senior counterparts are not smooth would also be redeployed.”

A source within the administration, who is privy to the details of the planned changes, said the country would soon witness greater synergy between the President and Vice-President Yemi Osinbajo. The source added that under the new scheme of things, the President intended to assign more important national duties to Osinbajo.

Buhari, who will resume duty on Monday after a 49-day medical vacation in London, is said to have been very impressed by what a source in government described as the ‘performance, competence and loyalty’ of  the Vice President, who served as Acting President while he was away.

When asked why it took the President two years to synergise fully with his deputy, the source replied that both men had  always been closer than the public knew.

“The President and the Vice President have always been on the same page. They are close. He likes to delegate tasks to the VP. However, not much could be done in the past because of the interference of some people close to the President. The President is determined to remove those who interfere so that his administration can build on its recent strides,” the source, who is a senior government official, said.

SUNDAY PUNCH learnt on Saturday that besides filling vacancies in his cabinet, the President  would redistribute some ministerial portfolios. He may also divest the former Governor of Lagos State and current Minister of Power, Works and Housing, Babatunde Fashola, of one of his portfolios.

The senior government officials who spoke to SUNDAY PUNCH were however not forthcoming with the names of those likely to be affected by the changes. They said the President liked to keep such things close to his chest. However, independent findings by one of our correspondents revealed that  those to be removed may include the Chief of Staff to the President, Abba Kyari; the Secretary to the Government of the Federation, Babachir Lawal; and some ministers who have been adjudged as under-performing. A former Governor of Edo State, Adams Oshiomhole, is expected to join the cabinet.

The source explained the criteria the President would use in reshuffling his cabinet.

He said besides measuring the performance of each cabinet member, the President would also examine the relationship between senior and junior ministers.

Currently, two states, Kogi and Gombe, have no representatives in the Federal Executive Council.

The Minister of Environment, Amina Mohammed, who hails from Gombe, left the Federal Executive Council last month when she assumed duty as the Deputy Secretary-General of the United Nations.

There has been speculation since late last year that the President would carry out a major cabinet reshuffle.

In Kogi State,  it was learnt that already, there was intense rivalry among various groups to  fill the vacant slot for the state

According to a report, the Kogi East zone, where Ocholi hailed from, had expressed concern about the  delay in picking one of them to replace the late minister.

Also,  the All Progressives Congress  in Kogi West was reported to be interested in filling the vacant slot of the state.

The President,  after his return on Friday,  promised to rededicate himself to serve Nigerians.

He said  he returned on Friday deliberately so that he could continue his rest while the Vice-President, Prof. Yemi Osinbajo continued working.

He also took a retrospective look at his about-two-month medical sojourn in London, and declared that he had never been this sick.

His statement contrasted sharply with that of top government officials who had insisted that he was hale and hearty.

“I couldn’t recall being so sick since I was a young man, including in the military with its ups and downs,” he said.

Buhari added that He said he remained grateful to all Nigerians who had been praying for his good health.

He said the support he had received was a testimony that in spite of the hardship being experienced, Nigerians were behind the government in its efforts to tackle the country’s challenges.