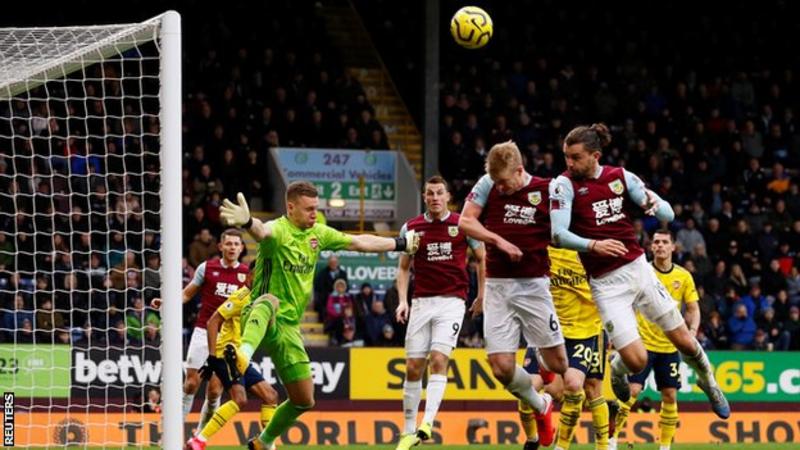 Burnley wasted the chance to punish Arsenal, who escaped from Turf Moor with a point from a goalless draw.

The Clarets at least ended a run that had seen them beaten in their previous 11 games against the Gunners, but the home side should have had more.

After riding some early pressure from the visitors, Burnley gradually asserted themselves to bombard the Arsenal goal with headed efforts.

Jeff Hendrick and James Tarkowski were most culpable of missing with headers, both failing to hit the target from close range, while Jay Rodriguez volleyed against the underside of the bar when he should have scored.

Arsenal extend their unbeaten run to seven games in all competitions, as well as being unbeaten in seven successive Premier League away games.

In truth, though, they were uninspired for long periods of this game, failing to gain a boost from the return of captain Pierre-Emerick Aubameyang after a three-match ban.

It was Aubameyang who had their best chances, miscuing when put through by David Luiz and later heading wide.

The draw sees both teams make marginal gains up the table, Arsenal to 10th and Burnley 11th, both on 31 points.

Burnley entered this game on the back of league victories over Leicester and Manchester United and will wonder how they did not make it three in a row.

In the opening stages, they looked in danger of being overwhelmed, but gradually outfought a Gunners side who were rarely without a player complaining, limping, or rolling around on the floor.

Burnley’s initial efforts were from the reasonable range – Hendrick, Rodriguez and Dwight McNeil all firing shots away – but it was from balls into the box either side of half-time where the hosts really should have taken the lead.

The Clarets swarmed all over the yellow shirts in the period after the break and it seemed unlikely they would get a better chance than when Hendrick missed the target with a header from six yards.

They did. From similar range, Rodriguez’s side-foot volley came down from the underside of the bar and bounced away off the goalline, replays clearly showing the ball had not crossed.

Aubameyang served a three-game ban after being sent off against Crystal Palace, returning to meet a Clarets side against whom he had scored seven in his past four matches.

He was involved in the Gunners’ bright start, crossing for Alexandre Lacazette, who failed to hit the target with a header, then shooting horribly wide when set free by Luiz’s long ball.

But as Aubameyang was controlled by Burnley right-back Matt Lowton, Arsenal’s attacking threat diminished to almost nothing, their front four dithering over the few scraps they were fed in the period of Burnley dominance.

Aubameyang’s header wide of the near post was their only chance of any note in a second half where it was all they could do to hang on.

In 25 league games this season, the Gunners have won only six and this was their 13th draw. Few of the other 12 will have come in such fortunate circumstances.