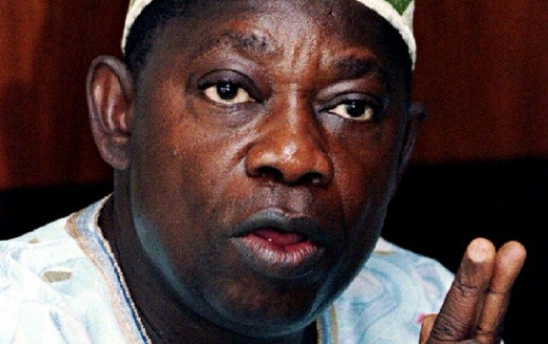 Abiola died under suspicious circumstances shortly after the death of Abacha. He was due to be released on July 7, 1998.

Speaking with reporters in Ibadan, Oyo state, after the third south-west annual lecture titled, ‘Developing leadership abilities in youth’, Al-Mustapha said the existence of the tape was known to a few Nigerians.

He said those who threw him in detention plotted to destroy the video tape.

Al-Mustapha said he was incarcerated for 15 years without given the opportunity to defend himself on the media.

“On October 21, 1998, I was arrested because of a video cassette, not because of the late Kudirat Abiola. But something happened, which a particular camera in the villa captured,” he said.

“So, they wanted to take the videotape and burn it so that Nigerians would not know what happened. That was the beginning of my travails.”

“For 15 years, I didn’t have the chance to defend myself in newspaper, radio and television. So, the belief was Mustapha had committed an offence, even before my arrest. But the actual thing that happened to the late MKO Abiola is in that cassette that they want to see, that is why Mustapha was subjected to punishment and I was called names. They have wanted to know the whereabouts of that tape in the last 17 years.

“I appeared before 14 judges in Lagos. As soon as the matter was about to finish, they would stop it and take us to another court. For 15 years, I was in that state. Out of the 15 years, five years and two months, I served in detention with torture. The remaining was between Ikoyi Prisons, Kirikiri Prisons and Kuje Prisons.

“Many people, particularly lawyers, took money from those who were looking for the cassette. They would go to radio and television stations to rain abuses on me, rather than coming to court. But they did not know what was going on in the court of law.”

He also denied being involved in the death of Kudirat, Abiola’s wife, saying the Abiola family was very close family to him.

Al-Mustapha alleged that Barnabas Jabila, better known as Sergeant Rogers, was influenced to give false testimonies against him.

Rogers was a member of the strike force and presidential bodyguard, which were specialised military squads believed to have been used by Al-Mustapha to get at the opponents of the Abacha regime.

Prominent personalities were killed under Abacha.

“On the late Kudirat Abiola, Rogers himself confessed in a court of law along with other witnesses how much money they were given. Rogers confessed he was told to do so. He was given money. He was given a house. He was given a car every six months, and he was promised to be taken outside Nigeria,” he said.

“The plan was as soon as Lagos court pronounced me guilty and I was to be hanged, then they would rush me to prison and hang me without giving me the option to go for appeal. That was what happened.

“I thank God Almighty everything that happened in Lagos State Court was compiled and signed by all the 14 judges. We are putting it together. My father has already put the book together in three volumes. You will see them soon.”

Do You Want To Win Your Husband Completely? These Are The 10 Things You Must Do!