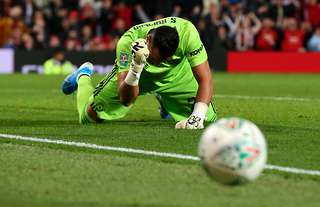 Sergio Romero saved Manchester United from an embarrassing exit in the EFL Cup as Ole Gunnar Solskjaer’s side needed penalties to knock out third-tier Rochdale after a 1-1 draw.

Mason Greenwood put United in front in the second half on Wednesday, the teenager scoring for the second week in a row after netting the winner against Astana in the Europa League.

But the League One side stunned Old Trafford with an equaliser scored by 16-year-old Luke Matheson, who was set up by United academy product Ollie Rathbone.

That sent the game to penalties and when Romero kept out Jimmy Keohane’s effort, Daniel James was able to convert United’s last kick and complete a 5-3 shoot-out victory.